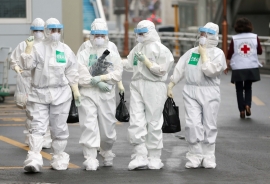 More than half of people who have been infected with novel coronavirus in South Korea have recovered, figures released by the Korea Centers for Disease Control and Prevention showed Saturday.

“Now, there are more people who have recovered than are sick,” said Yoon Tae-ho, director-general for public health policy at the Ministry of Health and Welfare, said in a briefing.

“We still have a long way to go, but a 50 percent cure rate is a small something that we can celebrate,” Yoon said.

The tipping point came 68 days after the country reported its first confirmed case of the new coronavirus, which was first found in neighboring China.

South Korea has seen a slowdown in the daily number of new infections from a peak of over 900 in late February to the around 100 recently.

Of the new cases, Daegu, the southern city hardest by the virus, accounted for nearly half of the new cases with 71, while 24 were identified during the infection screening process of international arrivals.

The virus has sickened 121 medics in Daegu so far, the KCDC data shows, 14 of them doctors, 56 nurses and 51 nursing assistants. Data on how many of them contracted the virus while treating infected patients was not available.

In 34 cases, the infected were followers of Shincheonji, a religious sect traceable to over 5,000 virus cases.