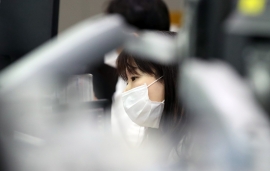 A currency dealer is seen at Hana Bank headquarters in Seoul. (Yonhap)

South Korea’s short-term funding market is showing no signs of stabilizing, despite the central bank’s relief package to help ease the credit crunch amid the global coronavirus pandemic.

The interest rate of commercial papers with 85-91 days of maturity -- a frequent short-term debt instrument by nonfinancial companies -- soared to 2.09 percent Friday, up 5 basis points from the previous day’s close, according to data from the Korea Financial Investment Association. The figure rose 63 basis points over the past week, meaning the price of it fell correspondingly.

These figures moved inversely with the policy rate, in the Bank of Korea’s 0.5 percentage point rate cut on March 16.

In the meantime, the short-term funding market is increasingly facing illiquidity as investors have been rushing to pull out their investments, the Kofia data also showed.

The total original investment in the money market fund accounts shrank by 13.3 trillion won ($10.9 billion) in a week until Thursday to 132.9 trillion won, while their net asset value dropped accordingly.

This betrays the Bank of Korea’s hopes to stabilize the short-term funding market through the “indefinite” measures that were partially implemented. Until Thursday, the BOK bought 3.5 trillion won worth of repurchase agreements (repos) issued by securities brokerage houses and purchased 1.5 trillion won worth of the sovereign bonds. Starting April, the BOK will begin to regularly purchase local bonds in repo operations every week.

“Short-term financing market did not budge despite the BOK’s efforts,” Kim Eun-ki, a credit analyst at Samsung Securities, wrote in a note Friday. “Especially, given that short-term money outflow is normal in late March, the latest measures, including a 5 trillion won package to help securities brokerages, seem to fall far short of being adequate.”

The signs of illiquidity are baffling investors. According to Kim, the investors have been not only spooked by the lack of improvement but also by the recent rate difference between commercial papers by corporations and certificates of deposit, a similar instrument issued by commercial banks.

The difference widened to 99 basis points as of Friday, which is above the level of that of 2008 financial crisis.

“Relief packages in April will be an inflection point to see whether the credit crisis comes into being,” Kim added.