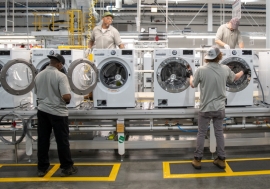 South Korean firms are shutting down more facilities across the world given the coronavirus spread, according to industry sources Friday.

Samsung Electronics has reportedly decided to shut down its home appliance factory in Campinas, Brazil, following the closure of its smartphone plant in Manaus in the country earlier this week.

The Campinas facility will be closed for two weeks from Monday through April 12. The shutdown of the Manus plant will also be extended to April 12. LG Electronics has also decided to close the washing machine plant in Tennessee in the United States during the same period.

The Tennessee plant churns out 100,000 washers a month and has hired around 600 employees.

Hyundai Motor will temporarily suspend operations at its plant in St. Petersburg, Russia, from Monday through Friday. It has been producing 230,000 vehicles a year at the plant since 2011.

Hyundai will also halt operations at its factory in Turkey starting Friday.