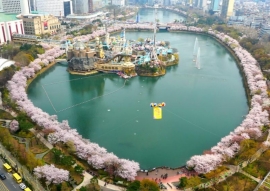 Entrances to Seokchon Lake, a famous sightseeing destination for its cherry blossom trees that bloom in spring in Jamsil, southeastern Seoul, will be temporarily shut down until mid-April to prevent people from visiting the area during the COVID-19 outbreak.

The decision came after the Songpa District Office announced the cancellation of its annual Cherry Blossom Festival last week. The festival was originally scheduled to take place from April 3 to 12.

Seokchon Lake is one of the most popular attractions in Seoul during springtime for its beautiful cherry blossom trees surrounding the lake in spring. More than 5 million people visited the lake in 2019 to attend the Cherry Blossom Festival, according to the Songpa District Office.

“Despite the cancellation of the festival, the 2.5-kilometer road around the lake is likely to be crowded with people wanting to see the cherry blossom trees,” an official at the district office told The Korea Herald. “So we decided to close up the lake with fences for now and encourage social distancing to prevent further viral infection.”

Earlier this week, four people who had visited the county of Gurye in South Jeolla Province were confirmed with COVID-19 infections after visiting the region to see Cornelian cherry flowers despite the cancellation of the Gurye Sansuyu Festival.

The Songpa District Office began the work to block the 54 entrances to the lake with 166 fence sections on Friday, the official added.