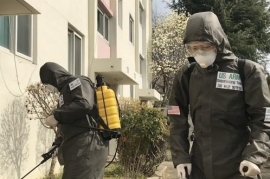 United States Forces Korea said Friday that a soldier and a contract worker at Camp Humphreys, its headquarters in Pyeongtaek, Gyeonggi Province, had tested positive for the novel coronavirus, bringing its tally to 12.

Of the 12 patients, two have been American soldiers -- one at Camp Humphreys, the other at Camp Carroll near Daegu -- and the rest were either the service members’ family or contract employees working for the US Army garrison.

Two days earlier on Wednesday, USFK declared a public health emergency, in line with the highest level of alert issued by the US State Department and the World Health Organization.

USFK said the measure did not mean an increased risk level, but was a symbolic reminder that the commander would exercise authority to enforce the military staff’s compliance with required precautions to contain the coronavirus outbreak at US bases here.

In a letter, USFK Commander Robert Abrams said military personnel who did not heed the precautions as demanded could be banned from entry to US installations in South Korea for two years.

Over the weekend, two American soldiers were found dead at the USFK headquarters in Pyeongtaek. The US military said the deaths were not linked to the virus.

As of Friday, South Korea’s military reported 39 confirmed patients and placed 1,520 of its personnel into quarantine. Twenty-nine of the patients have fully recovered from the virus.