Koreans choose to drink at home during virus quarantine 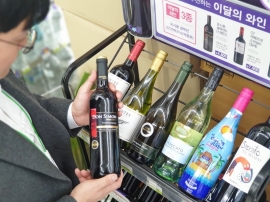 A customer looks at a bottle of wine at a convenience store. (CU)

The COVID-19 pandemic has changed daily life for many, driving society to endorse “social distancing” and putting people to work remotely, spending most of their time at home.

For many in Korea, well known for its binge-drinking and hoesik (nighttime drinking gatherings) culture, things appear to have changed significantly, as the latest data shows more opting to drink at home.

“(Because of COVID-19) I had many of my hangout plans canceled, and it was disappointing at first. But I realized it is much more comfortable and cheaper to drink at home,” Choi Jeong-hyun, an office worker in Seoul, said. "nd you can still get the excitement you get from drinking."

According to convenience store chain CU, sales of liquor products have jumped in recent weeks, reflecting a new trend of drinking from home, as people refrain from going to crowded places.

Wine appeared to be the most popular choice for home drinkers, accounting for 39.2 percent of sales during the period. Imported hard liquor products came second at 26.5 percent, selling “unprecedentedly” more than usual, CU said.

Korea’s traditional rice wine makgeolli and soju followed in the list with 21.1 percent and 17.3 percent, and beer followed with 10.4 percent. 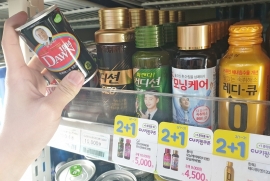 A customer picks up a hangover cure product at a convenience store. (CU)

As people find comfort in drinking at home, demand for hangover cures has markedly dropped.

In January, sales of hangover cures in CU stores had risen 6.1 percent on-year, but the figures plunged in the following months, showing a reverse performance of minus 13.9 percent in February and minus 22.5 percent in March.

“The sales of liquor is showing an outstanding increase as the lifestyles of the consumers have changed due to the COVID-19 outbreak,” a CU official said.

Universities pushing back the date for opening of the new semester and operating remote classes via video lectures also appears to have had an impact, according to CU.

The convenience store chain said it will run discount events for liquor and food items that go well with the drinks.