Having joined the competitive K-pop scene just last month, DKB has already proven itself as a breakout rookie group, equipped with rebellious energy and various talents.

The nine-member act is the first boy band under Brave Entertainment in eight years, an agency founded by K-pop hit maker Brave Brothers. An abbreviation of “Dark Brown Eyes,” referring to “nine Asian brown-eyed boys stretching out to the world,” DKB debuted with its first EP “Youth” and lead track “Sorry Mama” on Feb. 3. 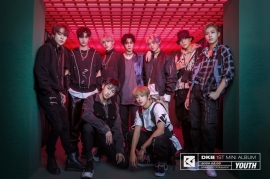 “It still feels like I’m dreaming. We just took a baby step, and we are satisfied with what we have shown with our first work. We look forward to how much more we can ascend,” E-Chan said in expressing his excitement for the debut in a recent interview with The Korea Herald in Seoul.

The group’s “Sorry Mama” is a hip-hop-oriented single overflowing with rebellious youth spirit. With lyrics like “I’m sorry mama, I’d like to play/I like my friends/I’m different from what you think of me,” the song encourages young people to stand up for themselves, rather than being obedient to adults. E-Chan, GK, D1 and Teo took part in penning the song.

The song’s relatable message also reflects the stories of the bandmates themselves, as many of them had to confront their parents who weren’t supportive of their K-pop career at first.

“I moved to Seoul six years ago from a faraway city called Miryang (in South Gyeongsang Province) to pursue my dream. I had to work day and night to afford money for lessons. My parents had worried a lot, but I didn’t want to depend on them. After countless failed auditions and part-time jobs, I finally became Heechan of DKB,” said the team’s main dancer.

GK shared that his mother, who was strongly against his K-pop dream at first, became one of his most ardent supporters after his debut. Japanese member Yuku also took on the challenge of leaving his country to follow his dream. “I could have become an idol in Japan, but I was so shocked by the performance of K-pop acts that I decided to come to Korea,” said Yuku, adding that he was deeply inspired by EXO.

What sets DKB apart from other idol groups is that the performance-based team makes its own songs and choreographies. Having trained under Brave Brothers, the nine bandmates have been crafting their own music since their trainee years. At monthly evaluations, they presented their own songs, some of which were selected for the group’s debut album.

“I had written a self-empowering song titled ‘Samsung’ for the monthly evaluation. I wanted to approach hip-hop, which is usually serious and heavy, in a more interesting way. So I likened one’s confidence with the Korean tech giant, a symbol of success. My idea was taken, and it went into our debut album,” said GK.

DKB also shared that the band created its own dance movements, so didn’t work with a professional choreographer. Having Junseo in the team, a former winner of dance competition “Dancing High,” has also been helpful.

Supported by the agency, the DKB members also took various lessons, such as DJing and acrobatics, as well as Chinese and Japanese language courses as trainees. Those learning opportunities not only helped them become multitalented, but also gain confidence.

”We had over seven lessons. It’s been busier than ever, more than when we were students. As for me, I learned DJing, which helped me understand hip-hop in a wider, more in-depth perspective,” said E-Chan.

D1 added, “Those lessons gave us a competitive edge. Our biggest strength is that we are capable of producing what we want. We are not confined to any framework.

“Our CEO always used to tell us, ‘Practicing hard is obvious. What matters now is having the audience’s approval.’ We plan to keep showing our musicality step by step until they accept us.”