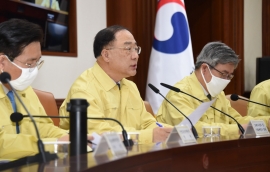 While presenting the central government’s latest market-stabilizing measures, he also said individual subsidy plans may create confusion, implying disapproval of moves by some local governments to distribute an “anti-disaster basic income” to residents.

“The employment promotion subsidy budget will be raised to 500 billion won ($406 million), up from the current 100 billion-won level,” said Deputy Prime Minister and Finance Minister Hong Nam-ki in a meeting with economy-related ministers at the Seoul Government Complex.

“Also, the macroprudential regulations that were introduced in the wake of the 2008 (global) financial crisis to prevent excessive capital outflow will be eased to match the incumbent circumstances.”

Financial institutions have been required to hold a minimum amount of foreign currency assets on hand, as a security measure against potential short-term liquidity disruptions. The designated foreign exchange liquidity coverage ratio, or LCR, for banks is 80 percent.

The details of the temporary financial deregulation will be mapped out and announced within the week, according to Hong.

Last week, Asia’s fourth-largest economy agreed to sign a $60 billion currency swap deal with the United States, the second of its kind since 2008.

“In order to have the right effect, policies should be carried out swiftly but also at the right pace under the right circumstances,” Hong wrote on Facebook.

The minister especially warned against reckless fiscal spending when the economy is under the strain of strict quarantine rules.

“Some countries have been combining (seemingly contradictory) policy actions, implementing pump-priming measures while shutting down businesses and banning travel,” he wrote.

“But such an approach may only hit an offbeat as the money could not be spent properly.”

Though he referred to “other countries,” the minister’s remark was largely taken as a subtle expression of disapproval after Gyeonggi Province announced that it would offer a universal basic income to all its residents.

“Despite the urgency, it is best to deal with the situations step by step (instead of rushing to direct subsidy plans),” he said.

“The order should move from quarantine measures, face mask distribution, tax and financial aid (to the) recovery of the local economy, and then to the general stabilization of the financial market.”