Remote work culture finally takes off in Korea, but will it stick? 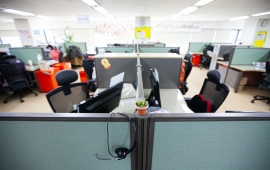 An office of a SK Telecom customer service center in Seoul remains empty on March 12, after the company allowed employees to work from home to prevent the spread of coronavirus. (Yonhap)

Various industries in South Korea have been forced into a mass experiment with the remote work system, intent to flatten the spread of COVID-19 since January.

With more people working from home, demand for telecommuting solutions has also been rapidly rising.

But it remains to be seen whether the emergency work-from-home trend will continue post-coronavirus in Korea, with a work culture that still heavily banks on on-site contact.

According to one of the leading telecommunication platform operators, Toss Lab, traffic for video conference calls on the company’s platform Jandi increased by 10 times between Feb. 24 and March 19.

Line Works, Naver’s telecommuting software, has also seen a fivefold increase in the number of subscribers between end-February and March 16, compared to that of the period between Jan. 2 and Feb. 26. The company added that use of video conference calls during the same period marked a sevenfold increase.

Backed by the increasing demand for remote work solutions, firms are introducing free trials, to help local companies battle the viral outbreak, as well as to tap the potential market here.

“Large conglomerates here, like Samsung, LG, Kakao and other firms are already equipped with collaboration tools. But many small and midsized companies have not. Naver decided to give free trials for those companies that have not prepared for this sort of circumstances,” said an official at Naver, which is also running a free trial of its remote work solution Line Works here by end-June.

Toss Lab started to offer the platform for free from Feb. 25. The company said around 150 companies applied for the free trial.

Samsung SDS is providing six-month free trials of its collaboration tool Nexoffice for those who apply by April 30.

Microsoft too is offering six-month free trials to those who apply for its one-stop collaboration solution Teams. Microsoft’s platform, titled Teams, is currently most extensively used by SK Telecom. Around 80-90 percent of SK Telecom employees -- more than 3,000 people -- had worked from home using Teams as well as its own conference call solution.

However, whether the unprecedented demand for remote-work tools in Korea continues even after the coronavirus remains uncertain.

Already, with signs of an aggravating business environment, some larger conglomerates such as Hyundai Motor have ordered employees this week to return to their workplaces.

“My company’s executives and board members seem to still prefer working on-site. They recently began to express concerns about employees’ work ethic and output,” said a Seoul-based woman, 41, who has been working from home for around four weeks now.

The Korean work-from-home market has not matured yet, when compared to Japan or the US, according to Naver, which has No. 1 market share with Line Works by securing 40,000 customer companies in Japan.

In Japan, remote work tools are more widely used, according to the Naver official.

Mizuno, a Japanese sports equipment and sportswear label, for instance, started to use Naver’s platform from last year at the sports teams it sponsors. Mizuno uses Line Works to manage offseason training schedules and monitor training progress of professional athletes by sharing videos on the platform, the Naver official explained.

In the US too, the market is growing fast. Global Workplace Analytics in a 2019 study said about 70 percent of the American workforce will be working remotely at least five days per month by 2025.

The factors hindering the remote work market include the corporate culture preferring the on-site work environment and widely spreading antipathy toward subscription-based services, according to multiple industry sources.

“Accepting remote working systems depends greatly on whether a company is really willing to bring such changes,” said Kim Chan-joong, a Korean architecture professor and the head of architectural firm The Systemlab. 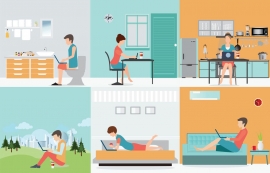 The Systemlab had started a remote-work system before the COVID-19 outbreak took a serious turn in Korea in January.

It was a difficult decision for the architectural firm, as it usually requires visual output checks on-site, but a decision was made to enable a more flexible working environment.

Now, about two-thirds of its workers are working remotely in shifts.

Before successfully running the remote work system, the company had to go through much trial and error, according to Kim. Office members had to adjust their work patterns and also make a new set of rules on their own to not lose track of their projects and the sense of collaboration when working physically apart.

“The backbone of existing remote-work solutions is roughly the same. However, how each company applies them to their different work schedules could yield vastly different results,” Kim said.