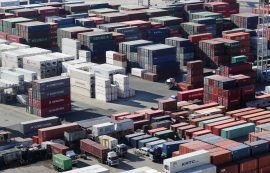 Despite a recent recovery, uncertainty is growing over South Korea's exports down the road due to the economic impact of the coronavirus pandemic, sources said Tuesday.

The country's outbound shipments grew 10 percent on-year in the first 20 days of March on brisk overseas demand for chips and automobiles, along with more working days, according to government data.

The solid increase follows a 4.5 percent rise in February, the first rebound in 15 months.

It marks a sharp turnaround from a 6.6 percent on-year decline in exports to China for all of February.

Yet observers say it is still premature to think that South Korea's exports have gotten back on track to a recovery, given the rapid spread of COVID-19 across the globe.

The World Health Organization declared the respiratory disease a pandemic about two weeks ago. The novel coronavirus has disrupted trade and halted production worldwide, with a rising number of countries fully shutting down their borders.

The virus outbreak has emerged as a big drag on South Korea, Asia's fourth-largest economy, as it depends on trade for nearly 70 percent of its gross domestic product.

The pandemic has thus made a big dent in South Korean exporters' sentiment. According to the Korea International Trade Association, its export business survey index stood at 79 for the second quarter, the lowest level in more than seven years. A reading below 100 means pessimists outnumber optimists.

Industry watchers also said bleak the economic situations in China and the US bode ill for South Korean exports in the coming months.

Major economic think tanks have revised down their growth outlooks for China to the 5 percent range for this year. Goldman Sachs has projected the US economy, the world's largest, to shrink 3.1 percent this year.

The Korea Institute for International Economic Policy has warned that South Korea will inevitably be hit by decreased demand for capital and intermediate goods from major economies should the new coronavirus spread further. (Yonhap)