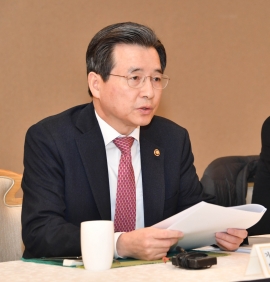 South Korea on Monday said it was carefully monitoring the financial market situations in New York and London, lest the global spread of COVID-19 lead to system breakdown in major economies and spill over to the global financial market.

In order to respond in a timely manner to potential risks in financial systems, an exclusive task force will kick off within the Ministry of Economy and Finance and hold a status meeting on a daily basis, according to Kim.

“Despite active market stabilizing actions such as the US Fed’s mass bond purchases, the global competition to secure liquidity is rising quickly,” Kim said.

Signs of market instability -- capital outflow and currency devaluation -- are rampant, especially in emerging economies that are highly reliant on foreign loans, as well as in raw material exporting states, he added.

He also flagged up the dangers for Asia’s fourth-largest economy, citing the financial market symptoms in the US bond market.

“The latest $60 billion currency swap deal with the US has greatly improved the dollar liquidity supply here, but we should keep up our guard as the domestic financial market is highly susceptible to the global market trend.”

Last Thursday, the Bank of Korea and the US Federal Reserve Board signed bilateral currency swap arrangements to be effective for the next six months.

The Korea-US currency swap was the second of its kind, following the $30 billion one back in October 2008 in the wake of the global financial crisis.

But Seoul’s vice minister also expressed deep concerns regarding the latest drop in US treasury yields.

“US treasuries are deemed the hardest rock in the global financial market. Whenever the market turns volatile, investors would rush to US treasuries, which is a basic rule of investment and a natural preference for risk-free assets,” he wrote on Facebook.

Citing a Financial Times article, which pictured a flight to cash causing longer-term bond yields to rise in the US treasury market, Kim urged the US Fed and Treasury Department for special countermeasures to stabilize the market.

“What has happened over the past two weeks will remain for decades as a symbolic event which pictures the market volatility caused by COVID-19,” Kim wrote.