Peak of virus outbreak not in sight: KCDC

Korea adds new patients each day by hundreds in past week 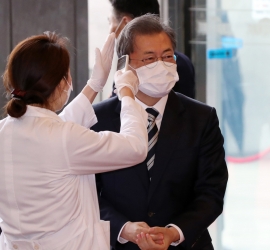 South Korea has been adding new coronavirus patients by the hundreds every day since Saturday with no end in near sight.

Addressing a press briefing, the centers’ vice director Kwon Jun-wook said 16 patients were in critical condition, with 10 put on respirators or mechanically ventilated.

“It is hard to say, at this point, when the outbreak will reach its peak here,” he said.

On a more hopeful note, the vice director said while the total tally is high, the majority of infections were tied to particular groups, as opposed to occurring sporadically with no discernible association.

“This makes case management easier,” he said, stressing the KCDC was working to trace the clusters of COVID-19 cases as well as their source of exposure as quickly as it can.

A KCDC official told The Korea Herald identifying the initial source of infection in Daegu and the surrounding North Gyeongsang Province would have to wait until epidemiological investigations in the area are concluded.

Korea’s virus transmission has grown with cluster cases there, with most prominent one being a messianic Christian church known as Shincheonji. Daegu City said Thursday out of 8,269 church followers in the city, 1,193 so far had been found to be symptomatic and put in isolation.

Hundreds of patients in the worst affected city, Daegu, are in home isolation, waiting to be admitted. As of 7 p.m. Thursday, only 522 out of 1132 patients in the city had hospital beds.

Korea’s latest virus-linked death was that of a confirmed patient in Daegu who could not receive hospital care since he was diagnosed three days earlier.

The man, 75, died Thursday in an ambulance after suffering respiratory failure. Until then, he was still in quarantine at his home in Dalseo-gu, a district in the west of the city. The Shincheonji follower was confirmed Tuesday to have contracted the virus, after he started having symptoms Saturday.

The patient, who had undergone a kidney transplant 20 years ago, was in a high-risk group but was denied hospital admission as there were no available beds.

The Health Ministry told reporters that as of Friday afternoon, 85.7 percent of beds at hospitals designated for virus treatment nationwide were occupied. Seoul, Busan, Daegu, Daejeon and Ulsan, as well as Gangwon, North and South Chungcheong and North Gyeongsang provinces all had their beds fully occupied.

The ministry said that once the state-designated hospitals reach full capacity, public and private health institutions will accommodate the patients.

Daegu Mayor Kwon Young-jin’s request to have the city’s patients moved to medical institutions in other areas was met by varied responses from local government heads.

But Gyeonggi Gov. Lee Jae-myung said transporting confirmed patients out of Daegu could jeopardize the safety of citizens elsewhere.

Lee said he believed it was safer to have patients of other illnesses, rather than COVID-19 patients, sent to other regions to make room for the virus patients on standby in Daegu.

“This is not to say Gyeonggi is rejecting COVID-19 patients, but having virus patients stay put and moving other patients may be a better strategy to mitigate further transmission,” he said, adding he has delivered this suggestion to the Interior Minister Chin Young.

Infectious disease experts say patients with milder symptoms may have to resort to home isolation, and recovering patients discharged earlier to increase availability of hospital beds.

Kim Tae-hyong, an infectious disease specialist at Soonchunhyang University Hospital in Seoul, told The Korea Herald that a patient must test negative in two consecutive tests with a 24-hour interval in between in order for the quarantine to be lifted.

“This follows the standard set up during Middle-East respiratory syndrome outbreak five years ago, but there are far more patients now than then,” he said. “We may have to start discussing how long a patient will receive isolation treatment to give more patients chance for treatment.”

But this was a “Plan B,” he said. “Securing enough hospital beds for all patients would be the best, but we failed to do that. This is an alternative suggestion.”

Meanwhile, health authorities have vowed to increase testing capacity to get as many as 15,000 to 20,000 tests done per day.

According to government figures, there are currently 101 medical institutions authorized to run virus tests, with about 10,000 tests being carried out each day.