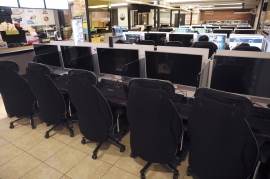 Rows of gaming computers in a PC Bang (Yonhap)

An internet cafe in South Korea goes by many names, but there is one unwritten rule that can’t change.

“Long ago, when people played StarCraft, they were willing to pay 2,000 won per hour,” said Kwon Young-mi from the marketing team of Sante PC, the No. 2 PC room franchise with 147 outlets in Korea.

“However, as franchised and large-scale PC rooms came in, competition got much fiercer, and raising the price above 1,000 won meant losing customers.”

The number of PC rooms, which first appeared in 1994 in Korea, exploded from around 1997 as internet use became a community activity. Added to that, people who lost jobs due to the 1997 Asian financial crisis jumped into the PC room business as PC game StarCraft was taking the nation by storm around the same time.

In a little more than two decades, the PC room industry has grown to 1.83 trillion won in sales with 11,801 outlets nationwide in 2018, according to the Korea Creative Content Agency’s latest report.

The average yearly sales of a PC room stood at 161.6 million won with daily visitors of 113.8 and 154.9 on weekdays and weekends, respectively.

However, maintaining the 1,000 won standard was tough as the minimum wage and rent kept rising every year. Also, PC rooms were burdened with constant maintenance costs as they had to update their facilities or equipment to accommodate newly released popular games.

In the face of mounting economic pressure, desperate PC rooms found a breakthrough, by turning themselves into restaurants.

As soon as PC rooms realized they couldn’t stay in business just from the hourly fees of customers, they started selling more than the simple soft drinks, snacks and instant cup noodles. 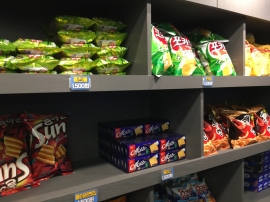 More complex food items began to be introduced in their menu, such as pork cutlet, spaghetti and omurice -- fried rice wrapped in egg omelet.

However, in 2010, their grand strategy was curtailed by regulations of the Ministry of Food and Drug Safety, which limited them from serving cooked food to customers.

Ironically, the government’s intervention was an impetus that shaped the PC rooms that exist today.

Rather than circumventing regulations, PC rooms dealt with the issue head-on by acquiring a restaurant license for rest areas. With the license, PC rooms could serve cooked food to tables less than 1.5-meter-wide.

As the 1.5-meter-wide space was big enough to fit a customer and a computer, the restaurant license for rest areas was equivalent to a license to cook. 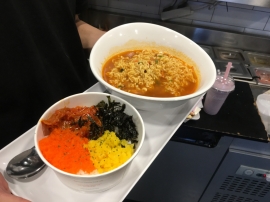 The license allowed PC rooms to run their own kitchens with microwaves, air fryers and even rice cookers as long as their kitchens are equipped with a sink, countertop, electric stove and ventilation system.

To ensure hygiene, the license also requires health certificates issued by public health centers to anyone working in PC rooms with the license.

However, there was one major hiccup.

“Kitchens had to be divided by walls from the rest of the business areas in PC rooms, which incurred significant remodeling costs,” said an official from the Korea Internet PC Culture Association.

The division rule, which slowed down the transformation of PC rooms, was relieved in December 2015. Since then, kitchens only had to be “distinguished” from the rest of the business areas, for instance, with a simple yellow line tapes on the floor.

After meeting all the requirements, kitchens in PC rooms can now serve a whole list of menus. Just with a few clicks on their seats, customers can place an order, which immediately pops up on the monitor at the cashier’s desk. In few minutes, orders are delivered to their seats, from a bowl of spicy instant noodles to blueberry smoothie, Belgian waffles with whipped cream and roasted sweet pork belly with kimchi and rice. 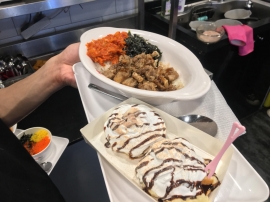 The transformation of PC rooms into restaurants, as a matter of fact, has changed the business model.

According to PCtorang, a PC room consulting firm that has access to the sales data of some 1,300 PC rooms, food sales accounted for 40 percent of total sales for a PC room of 100 seats in 2019. The figure stayed around 10 to 20 percent in the early 2000s, the firm added.

“Some mega PC rooms in Gangnam-gu, Seoul, with more than 300, 400 seats, only charge 500 won per hour. Instead, they make a profit by serving food as customers stay longer due to cheaper fees and get hungry,” said Sante PC.

Despite their relentless efforts to stay afloat, PC rooms were met with yet another challenge: skyrocketing minimum wage.

As most PC rooms run their businesses 24/7, soaring labor costs demanded a solution, and they found one. It was kiosk. 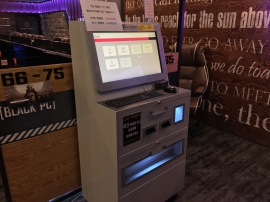 “The minimum wage was an issue. It was a pressure. So we are focusing on automation as there is are fewer customers late at night,” said the official from the IPCA.

According to game data provider Gametrics, the average rate of PCs in use at the outlets, which peaked to 42.3 percent at 5 p.m., dropped to 28.4 percent at midnight, plunged to one-digit figure starting 5 a.m. and hit rock bottom at 8 a. m. to 5.5 percent in January 2020.

“Customers can make a deposit and pay fees via an automated kiosk system, so it really helps. Thanks to the system, we can hire one person instead of two.” the Sante PC said.

However, even with licenses and kiosks, the fate of the PC room industry ultimately depends on the performance of the gaming industry.

In 2019, PC rooms suffered the lowest average rate of PCs in use since 2017, recording 23.7 percent due to the weak performance of newly released games, according to Gametrics.

In 2016, the figure was 25.36 percent thanks to Blizzard Entertainment’s first-point shooter game Overwatch released on May 24. In 2018, the number stood at 25.02 after Kakao Games, a game-developing and publishing subsidiary of internet company Kakao, started hosting PlayerUnknown’s Battlegrounds on Nov. 14, 2017.

According to KOCCA, 91.9 percent of PC room customers visit the venue with the sole purpose of playing games.

The same survey showed that of those who upgraded their facilities throughout 2018, 60.3 percent were to mobilize popular games at the time.

The PC cafes were also seen to continue seeking ways to stay relevant, with some 16.8 percent answering they have introduced headsets for virtual reality games.