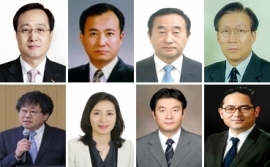 Eight candidates are proposed for Hanjin Group’s board by a coalition comprising Cho Hyun-ah, KCGI and Bando Construction.(Yonhap)

In response, Korean Air’s labor union said in a statement it would stage “an all-out war to stop the three-party coalition,” saying the candidates had been chosen under the influence of those in higher positions.

As of January, Korean Air’s unionized members stood at 10,032 out of a total of 19,469 employees, according to the company.

“Those figures who were praised as professional CEOs by the coalition know nothing about the aviation industry and will only become puppets of former Vice President Cho Hyun-ah,” the labor union said in the statement.

“Is it really possible for the company to survive in the ever competitive business environment if it is dominated by the coalition? The coalition is nothing but the combination of Cho’s greed and her speculative capital to kick out employees on the street,” said the statement.

Unionized workers added that some 20,000 Korean Air workers have rebuilt a cooperative corporate culture over the past two years and asked to support the labor union to protect the company.

Since last year, Cho Hyun-ah has publicly accused her brother, Chairman Cho Won-tae, of not following late Chairman Cho Yang-ho’s will to run the company harmoniously between family members.