KLM apologizes after being accused of coronavirus racism 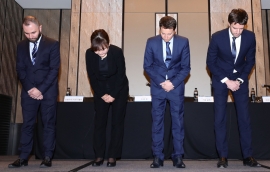 KLM executives including Guillaume Glass (second from right), general manager for Korea at KLM, apologize over the recent incident during a press conference in Seoul on Friday. (Yonhap)

According to a Korean passenger onboard the KLM 855 flight bound for Incheon from Amsterdam on Monday, a hand-written note that read “cabin crew exclusive restroom” in Korean was posted on the door of a restroom.
Koreans made up 135 out of 279 passengers on the plane.

When a passenger asked why the note was written only in Korean, a KLM crew member said they had posted an English version next to it and that it was to protect the cabin crew’s health so they could “do the work for passengers.”

After the story went viral online and was reported in the Korean media, public criticism mounted, demanding an explanation from KLM about designating a restroom for crew and why the sign was written only in Korean. 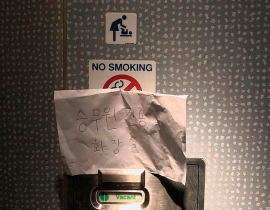 A hand-written note that reads “cabin crew exclusive restroom” is posted on the door of a restroom on KLM flight.

“We take the allegations that we have discriminated against a part of our passengers very seriously. We are deeply sorry that this was viewed as discrimination, which was absolutely not the intention of the crew,” Guillaume Glass, general manager for Korea at KLM, said during a press conference in Seoul on Friday.

Glass added that it was “a human mistake” to only leave a note in Korean, saying the action was done by an individual, not based on KLM policy.

He added that 10 cabin crew members onboard KLM 855 would have in-depth face-to-face talks with the vice president at The Netherlands headquarters.

As of Friday, 121 more deaths from the coronavirus outbreak have been reported in China, with 116 from the epicenter of the infection, Hubei province.

The total number of deaths was 1,488. At least 25 other countries have confirmed cases. In Korea, the virus has infected 28 people, with seven of them released from hospitals after fully recovering.