[Weekender] At home, safe from the virus 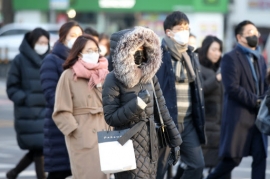 Since the first case of COVID-19 was confirmed last month, many South Koreans have put their social lives on hold, choosing to stay home most of the time.

When they have to step outside, many cover their faces with masks, guarding against the possibility of contracting the potentially deadly coronavirus from strangers. Masks and hand sanitizers are everywhere, from subway trains to wedding halls.

Movie theaters are empty, graduation ceremonies are canceled and more meals are being delivered to people’s doorsteps.

A sense of disconnection, isolation and anxiety creeps in as the situation continues.

“Usually, I go out with friends at weekends and relieve my stress while chatting with them. But we don’t make appointments unless there is something urgent as we try to avoid going to crowded places,” said Emma, a 27-year-old office worker living in Seoul.

“Since the Lunar New Year holiday ended, I have been stuck at home watching TV. As I spent much of (that) time alone, I feel a bit depressed and isolated. I even watch volleyball games, which I have never watched before, and some old TV series being aired again.”

Middle-aged office worker Kim Yoon-seok said he feels at a loss sometimes when trying to decide what to do in his leisure time. Before the virus, it was pretty much occupied by boozing sessions.

“I used to have four dinner appointments a week on average. Now I just go home after work. I feel like I am living a life of a loner,” he said. “I realized that I really don’t have anything that can be called a hobby, except browsing through the TV.”

According to online movie streaming service Watcha Play, the amount of content viewed on its platform surged by 14.6 percentage points during the first weekend of February, compared with the weekend before the Jan. 24-27 Lunar New Year holiday.

The spread of the new coronavirus shows no signs of slowing, with 242 new deaths and 14,000 new infections reported in China’s Hubei province, the epicenter of the outbreak, Thursday morning.

As of Thursday, Korea has 28 confirmed cases of the coronavirus, while seven people have been discharged from hospitals after making a full recovery, according to the Korea Centers for Disease Control and Prevention.

Kang Ji-min, a 39-year-old mother of an 8-year-old girl, said she usually ventures out to museums and galleries on weekends. For the past few weekends, she has stayed home with her family, but it is not all bad.

Last weekend, they watched the 2011 film “Contagion,” about a global pandemic.

“I feel nervous going out, so we watched a film at home instead of going to a movie theater,” she said. “It was good that I did some housework that I had delayed, took a rest and read books. …”

“But if the situation gets protracted, I would feel caged,” she said.

Her daughter is getting bored because she’s stuck at home while her school is temporarily closed because of the outbreak, Kang said. The girl no longer goes to the playground or to swimming lessons either.

As of Wednesday, only 38 percent of kindergartens and elementary, middle and high schools are holding classes as planned. Some 2.6 percent of the institutions are closed or still on winter break, while 60 percent are on spring vacation.

Major universities -- including Seoul National University, Korea University, Sungkyunkwan University and Ewha Womans University -- postponed the start of the new semester by a week, with make-up classes to be held at a later date or replaced by online lectures.

One of the positive changes, though, is that Koreans are more aware of the importance of personal hygiene to prevent illness.

“I wear a face mask even when I go to a supermarket in front my house. It became a habit to wash my hands more often,” said Park Se-jin, a 34-year-old artist living in Seoul.

“I did not know why wearing a mask could prevent me from getting diseases, but now I know the importance of it.”