[Video] Why does ‘Parasite’ mix pricey beef into instant noodles? 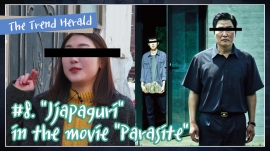 The food featured in director Bong Joon-ho’s “Parasite” is not just nourishment for the characters but also serves up symbolism and social satire, hinting at social stratification in Korean society.

As the movie’s plot gains momentum, one of the foods in focus is jjapaguri -- translated as ram don in the English subtitles. The Korean name comes from its two main ingredients -- the instant noodle brands Jjapaghetti and Neoguri. Bong spices up this otherwise ordinary dish by adding chopped steak.

The unlikely mix comes from the desire of the wealthy mother in the film, who doesn’t want her son to eat a cheap meal. This is why hanwoo beef, which is expensive, is thrown into the instant noodle dish.

Bong appears to use the dish as a symbol of the rich-poor divide. In the movie, the Kim family go for the cheapest canned beer and packaged goods at the beginning of the movie, whereas the rich Park family have expensive wine and whiskey and high-quality food. The movie also takes a close look at the parallel lives of the rich and poor in Korea in terms of morals and behavior.

Much has been written about “Parasite,” generating diverse views from moviegoers and critics, but it has been a success worldwide, grabbing six nominations at the Oscars.

Check out the video if you have an appetite for exploring culinary delights in “Parasite.”