The Seoul High Court said it will take into account the effectiveness of a new internal compliance committee at Samsung Electronics in its ruling on Samsung heir Lee Jae-yong’s jail term, during the fourth hearing of Lee’s retrial on Friday. 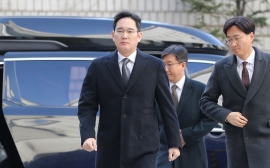 Samsung heir Lee Jae-yong enters the Seoul High Court for the fourth hearing of his retrial on Friday. (Yonhap)

The court said it will designate third-party experts to check on the implementation of compliance rules at Samsung, and only successful results will be considered in its decision on the length of imprisonment for Lee in the bribery case involving former President Park Geun-hye.

It will designate three experts -- with one recommended by the court, prosecutors and Samsung each -- to closely watch operations of the compliance unit formed by Samsung.

The court also said it will recommend Kang Il-won, a judge of the Constitutional Court of Korea, as a possible member of the panel. Kang was the lead justice in the impeachment case of former President Park.

“Still, there are citizens who are suspicious about Samsung’s willingness to comply with the laws, and (the court) needs to strictly check if Samsung fulfills its promises,” the court said.

It added that the court can take into account the compliance committee in the final sentence only if the committee functions as it should.

The prosecutors and Samsung have been asked to choose their own candidates by end-January.

Meanwhile, the court has ruled out some of the evidence provided by prosecutors, including those related to suspected window-dressing by Samsung Biologics in 2015, allegedly to inflate Cheil Industries’ stake in the conglomerate’s bio unit and aid Lee Jae yong’s managerial succession from his ailing father.

Retrial judge Jeong Joon-young explained that the court might refer to evidence related to the Samsung Biologics case and others but it did not have to examine such evidence in the current hearing, as the Supreme Court did not bind the succession issue to the retrial.

Initially, prosecutors had tried to prove an alleged connection between the bribery case and the conglomerate’s suspicious activities during the merger between Samsung C&T and Cheil Industries, which benefited Lee, who holds the largest share in the latter.

Prosecutors also suspected that the window-dressing of the bio unit helped the company to reach a merger ratio favorable to Lee.

Prosecutors, however, have appealed against the court’s decision, saying they cannot accept the compliance committee being taken into account in the sentencing of the bribery case.

Prosecutors added they will not cooperate with the designation of the three experts.

The next hearing of Lee’s retrial is scheduled for Feb. 14.