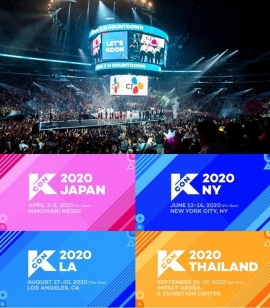 This year's KCON, a festival of Korean music and culture, will kick off on April 3 at the Makuhari Messe convention center in Chiba Prefecture, just outside Tokyo, for a three-day run.

For the American leg, KCON will move to New York's Manhattan from June 12-14 before a four-day event in Los Angeles from Aug. 27-30.

The show will wrap up its 2020 edition with a two-day event at Bangkok's Impact Arena and Exhibition Center from Sept. 26-27, according to CJ ENM.

Launched in 2012 amid the global emergence of K-pop and Korean cultural content, KCON has been at the forefront of promoting Korean culture overseas and spans K-food, K-beauty and K-dramas.

This year's New York leg will introduce a new event, "KCON Rookies," featuring a music showcase by up-and-coming K-pop artists to help launch them onto the global stage, the company said.

The 2019 KCON featured an army of high-profile K-pop stars such as boy band Seventeen NU'EST and TXT. (Yonhap)