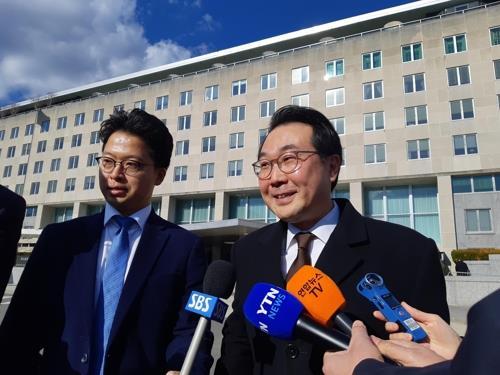 Lee Do-hoon, special representative for Korean Peninsula peace and security affairs, made the remark to reporters after holding talks with his US counterpart, Deputy Secretary of State Stephen Biegun, in Washington.

The pair met after President Moon Jae-in expressed a desire earlier this week to implement inter-Korean projects as a way to facilitate denuclearization negotiations between the North and the U.S. Most of the projects, including efforts to reconnect railways and roads between the Koreas, have stalled due to United Nations sanctions on Pyongyang.

"(Biegun) and I agreed that from now on, South Korea and the US will continue to hold close consultations on inter-Korean cooperation projects. We are just beginning," Lee told reporters outside the State Department.

Washington has been wary of allowing exceptions to the UN sanctions regime out of concern they could undermine its "maximum pressure" campaign to denuclearize the North.

Moon said in his press conference this week that individual tours to North Korea, apparently referring to the scenic Mount Kumgang, do not fall under the scope of sanctions.

Asked if he and Biegun discussed the issue of the individual tours, Lee declined to offer details.

"I explained it fully today and we plan to continue consultations," he said, adding that Washington has always expressed its respect for decisions South Korea makes as a sovereign nation. "And I believe it's important that South Korea and the US work hard together and coordinate with each other as allies on the basis of that respect."

Lee explained that although individual tours are not subject to sanctions, they could raise "minor issues" in terms of what items tourists are allowed to bring to North Korea.

"I think we can work to ensure that there are no misunderstandings by consulting experts and monitoring the issue," he said. (Yonhap)