Legendary British rock band Queen’s guitarist Brian May, drummer Roger Taylor and their vocalist of a decade hailing from the US, Adam Lambert, have returned to Korea perform at this year’s Hyundai Card Super Concert.

“I think this time, our visit to Korea may be on another level, after the fantastic success of the ‘Bohemian Rhapsody’ movie on our career and Freddie,” Taylor said at a press conference Thursday at the Conrad Seoul Hotel. The band last performed in Seoul five years ago. 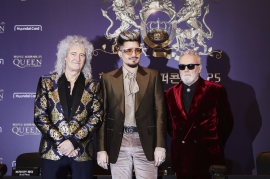 Members of Queen, Brian May (left) and Roger Taylor (right), and vocalist Adam Lambert pose for photos at a press conference at Conrad Seoul Hotel on Thursday. (Hyundai Card)

The Queen biopic enjoyed huge popularity here upon its release in October 2018, running for more than two months in theaters and selling nearly 10 million tickets. Some theaters turned into impromptu venues themselves, with theatergoers singing along and dancing to the musical flick.

“The news has got to us that it was a huge success, and this is wonderful,” May said during the conference, adding, “It has definitely brought us some new generation here. We’ve witnessed that at the airport.”

Hundreds of fans, many of them too young to have been born when the band was at its peak in the 1970s and ‘80s, greeted the trio with screams and cheers at Incheon Airport the previous day.

Lambert joined May and Taylor in 2009 after the duo recognized the talent of the vocalist from “American Idol.”

“This is something we’ve been working on for a while,” said Lambert, expressing excitement at his second visit to Seoul. “It’s good to be back and we’re ready for a great show.”

The band is in Seoul as part of the Rhapsody Tour, which kicked off July last year in Vancouver, British Columbia.

Countering concerns from fans who had worried about the absence of the singular frontman Freddie Mercury, who died in 1991, and his replacement by Lambert, the three seemed tightly connected and comfortable in each other’s presence.

Lambert also stressed he does not intend to replace Mercury and is not trying to fill in his shoes, but is just featuring for the legendary band that he also admires.

“Freddie Mercury is my hero, as a singer, as a musician, as a performer, as a fashion icon,” the 37-year-old singer said. “It’s such a joy to be on the stage and celebrate him with Brian and Roger. And I continue to remind the audience that I’m exactly as they are. I’m a fan as well, and with that we get to party together. It’s a bonding experience,”

Queen and Lambert will be hitting the stage over the coming weekend at Seoul’s Gocheok Sky Dome.

According to Lambert, many parts of the upcoming concert have been inspired by Queen’s album titles.

“I think the cool thing is that these are the songs that made Queen famous. The audience sings along loudly every time,” he said, adding, “Everyone knows (the songs), and it’s all about figuring out how to make it feel new. And that’s an exciting proposition, and it’s something that we did very well together.”

Queen was formed in 1970 in London with original members Mercury, May, Taylor and bassist John Deacon, who retired from the band in 1997.

Their hit songs include “Bohemian Rhapsody,” “Somebody to Love,” “Don’t Stop Me Now” and “Under Pressure.”