S. Korea all set for annual ADB meeting slated for May in Songdo

South Korea’s government will be initiating the registration process for the annual meeting of the Asia Development Bank, to be held here in May this year, the Ministry of Economy and Finance said Thursday. 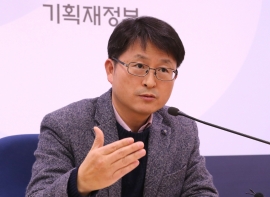 “We have finished reorganizing the official website for the operation of the 53rd ADB Annual Meeting of the Board of Governors,” said Jung Byung-sik, operation head of the ministry’s task force, adding that registration starts Friday.

While official registration is through the ADB’s website (www.adb.org), Seoul’s ministry will also open a Korean version (www.adb2020.org) to provide local details, including information about tourist attractions.

This year’s event will run from May 2 to 5 at Songdo Convensia in Incheon, with some 5,000 attendees expected from 68 ADB member states, the ministry said.

The itinerary will include official ADB sessions -- the opening ceremony, business sessions and a governors’ seminar -- as well as regional summits on the sidelines, such as the Korea-China-Japan financial ministers’ summit and the ASEAN Plus Three finance ministers’ meeting.

As host, Korea will also have the opportunity to promote its high-tech industries and culture to the participant countries and individuals, according to the ministry.

In ADB-led project presentations, Korean public institutions such as the Public Procurement Service, the Korea Trade-Investment Promotion Agency and the Export-Import Bank of Korea will provide counseling sessions to companies in attendance.

In January last year, Asia’s fourth-largest economy announced that it will hold this year’s ADB gathering. During the following months, the Finance Ministry initiated a pan-government task force and has held four working-level meetings with its ADB counterparts throughout the year.

In March this year, new ADB President Asakawa Masatsugu is set to visit Seoul and Songdo to conduct a preliminary check, officials said.

Headquartered in Manila, the Philippines, the ADB was established in 1966 to boost regional economic cooperation in the Asia-Pacific region and to operate development funds for member states.