The Ministry of Science and ICT said fostering the industries of data, network and artificial intelligence will be a priority this year in its annual policy briefing to President Moon Jae-in on Thursday. 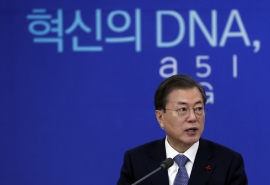 President Moon Jae-in speaks at a meeting where he received a briefing on policy plans from the Ministry of Science and ICT and the Korea Communications Commission, Thursday. (Yonhap)

This year, the ICT Ministry will control some 24 trillion won ($20.7 billion) for its research and development budget, an increase by about 18 percent from 2019, it said in the presentation held at Daedeok Innopolis, an R&D complex in Daejeon. The budget will be spent in sectors with growing importance, such as artificial intelligence, bio technology, 5G networking and space technology.

Korea Communications Commission joined the briefing. The two were the first to deliver policy plans to the president, which Cheong Wa Dae said reflected the administration’s focus on science technology.

“Science and technology have power to change the lives of citizens. They are also the sources that will drive the nation’s future growth and solve social issues,” President Moon said.

The ministry said the government will aim to maintain regulation at the bare minimum, while making updates on outdated regulations. 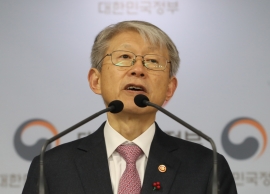 In the wireless telecommunications industry, the ICT Ministry will attract private businesses to invest in further expanding their 5G networks nationwide by offering tax benefits. The Ministry expects the estimated cost to reach a total of 30 trillion won by 2022.

The government will also move to the next phase in space technology. In February, the ministry will launch its geostationary environmental monitoring satellite, designed to check the movement of fine dust and other air pollutants in the East Asian region. The ministry will prepare for the safe launch of Korea’s first homegrown carrier rocket in 2021.

The quantum cryptography businesses will be offered some 114 billion won from the government over the next five years.

The ICT Ministry said that it will continue its support in the parts manufacturing industries for stable supply of 100 key components that many companies used to rely on imports. About 335.9 billion won of financial support will be offered by the government.

Its support in the renewable energy sector will also continue. In particular, the ministry is planning to offer 1.5 trillion won to businesses related to hydrogen energy over the next 10 years.

The ICT Ministry will forge a team of members from eight government bodies, including the KCC. The government team will clear out and bring together guidelines related to traditional media businesses, as well as newly emerging ones like over-the-top media services. The group will roll out its plan in March this year.