KEB Hana Bank and Woori Bank, the two major commercial banks blamed for the misselling of high-risk derivative-linked financial products, were caught in a heated last-minute debate to minimize the level of sanctions on their top executives.

The two banks, along with a number of brokerage firms, came under fire last year for the improper sales of derivative-linked funds without properly notifying customers of financial risks involved. The products, designed to track the performance of constant maturity swap rates of the US dollar and UK pound or German bond yield, led to massive financial damages on investors, many of whom were ordinary individual financial consumers.

The given FSS panel meeting, conventionally held at 2 p.m., kicked off at 10 a.m., starting with KEB Hana Bank and its former chief Ham, who was KEB Hana Bank CEO at the time of the DLF sales. Sohn and Woori Bank officials attended the afternoon session.

Neither of the two top officials were obligated to be present, but they decided to speak for themselves given the gravity of the issue.

During the closed-door discussion, FSS investigators and counterpart bank officials respectively presented their cases before the nine-member committee comprised of five civilians and four financial officials.

The prime matter at hand for both lenders is whether the FSS panel will stick to the “heavy sanctions” that may henceforth affect their governance.

In a preliminary action in December, the financial watchdog notified the two banks that Ham and Sohn may face “reprimandary warnings,” separately from the penalties and compensation duty of the banks.

Should these sanctions take effect, the two would be barred from serving another term in the future. While Ham has recently clinched his second term as group vice chairman, Sohn is awaiting his consecutive appointment to be confirmed at a shareholders meeting slated for March.

The FSS holds the exclusive authority to hand down warnings to bank chiefs, without the need to submit the agenda to the Financial Services Commission.

What has prolonged the FSS’ decision-making process, however, is the dispute as to whether the lack of internal control justifies sanctions on executive members.

The Act on Corporate Governance of Financial Companies obligates financial firms to establish necessary means to maintain internal control, but a revision bill that includes the sanctions on CEOs is still pending at the National Assembly.

Pointing out the lack of legal grounds for CEO punishment, banks also underlined their full cooperation with the FSS’ recommendations for compensation. 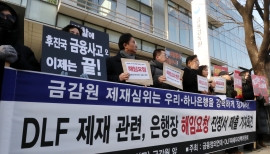 Victims of the disputed derivative-linked funds hold a protest in front of the Financial Supervisory Service building in Yeouido, central Seoul, on Thursday, ahead of the sanctions committee meeting. (Yonhap)

Meanwhile, the emergency committee of DLF fiasco victims submitted a petition to the FSS earlier in the day, demanding the dismissal of the corresponding banks’ top officials.

In 2014, then-Chairman of KB Financial Group Lim Young-rok was handed a three-month suspension for neglecting supervisory duty over the replacement of the flagship KB Kookmin Bank’s computer system.

The related sanctions decision at the time required six panel sessions over about a month and a half.