Park Na-rae to ‘Stand Up’ on small screen

After airing two pilot episodes in November, KBS will air comedy show “Stand Up” every Tuesday starting Jan. 28, featuring Park as the main host. A total of 10 episodes are scheduled for release.

“Stand Up” is a comedy show for adults that delivers diverse stories about life, according to KBS. Park will lead the program, with guest comedians joining her on the show. 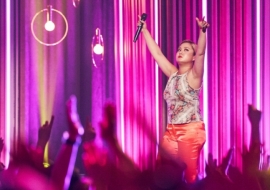 On the risque Netflix show, Park broke the norms for a female celebrity here, creating a buzz with her own stories and off-color jokes.

Though stand-up shows have not been a mainstream offering in the local comedy scene -- which is heavily dominated by variety shows -- there have been attempts to break through.

Netflix reintroduced the genre to South Korea with TV personality Yoo Byung-jae’s “Too Much Information” and “Discomfort Zone” in 2018. On the streaming platform, Yoo offered heavy sarcasm about current events from a young person’s perspective.