SK Engineering & Construction said Thursday that it had formed a joint venture with Bloom Energy, a US-based energy firm, to produce solid oxide fuel cells from this year, a first in South Korea.

According to SK E&C, it inked a joint venture agreement with Bloom Energy in September last year, cementing their plans to distribute the fuel cells and build factories in Korea. 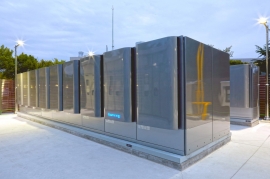 A manufacturing facility is under construction in Gumi, North Gyeongsang Province, and the companies will start by producing 50-megawatt fuel cells and incrementally work toward 400 megawatts.

“SK E&C is developing the fuel cell business with a long-term vision to transform from an EPC contractor of large power plants into a distributed energy resource utility,” SK E&C President and CEO Ahn Jae-hyun said.

“I have no doubt that we will achieve success in the quickly growing Korean market, and truly hope that such cooperation will continue in the global market, including the Asia-Pacific region.”