SEJONG -- Fifty years ago, the number of South Koreans engaged in agriculture accounted for more than 40 percent of the total population.

But the farming population (defined by the government as people in farming households) has continued to drop. It fell to below 30 percent of the total population in 1980 and was about 15 percent in 1990, according to government data.

The Ministry of Agriculture, Food and Rural Affairs noted that the farming population posted 4.4 million in 1998, accounting for 9.3 percent of the total population. 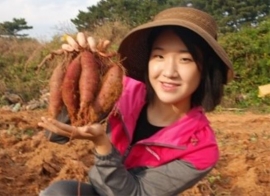 A farmer in her 20s, who leads an agricultural enterprise as the CEO in Gimje, North Jeolla Province (Kang Bo-ram Sweet Potato Co.)

An Agriculture Ministry official attributed the steady decline to a shift in land use from agriculture to housing, and households abandoning farming due to poor returns.

In particular, he said the situation in rural areas has become more serious in terms of demographic structure – leading to a manpower shortage as young people steady relocate to cities.

By province, the farming population had the largest share of the total in South Jeolla, with 17.1 percent as of 2018, followed by North Gyeongsang (14.1 percent), South Chungcheong and Jeju (12.7 percent), North Jeolla (11.4 percent), and North Chungcheong (10.2 percent). Gyeonggi recorded the lowest of 2.3 percent among the nine provinces.

Among eight major cities, Sejong topped the list at 4.7 percent as the autonomous city includes a large rural area, trailed by Ulsan (2.5 percent), Gwangju (1.7 percent) and Daegu (1.6 percent). Seoul ranked at the bottom with 0.1 percent. 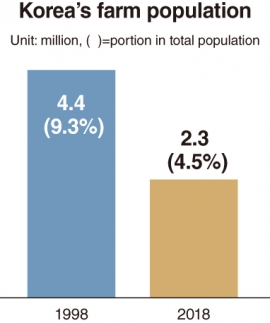 Over the past decade, the government has provided young urbanites in their 20s, 30s and 40s, who moved to rural areas and tapped the farming sector, with a variety of benefits, which aroused a trend to return to agriculture.

But it seems that the trend has waned, as many of them have failed to adapt themselves to rural life.

The problems they picked included difficulty getting along with their new neighbors, a lack of farming know-how and financial difficulties due to lower incomes.

According to the Agriculture Ministry, the number of people who still continued farm work after moving from urban areas stood at 17,856 (including household members) as of 2018, down 9 percent from 19,630 a year earlier.

It marked the second consecutive year of decline after the population having peaked at 20,559 in 2016.

A more worrisome point is that the 2018 figure was the lowest in five years since the government started compiling the data in 2013, when it was at 17,318.

They refer to residents who engage in services or retail businesses or do not take part in economic activities after moving to the countryside.