Mahindra may seek support from KDB for SsangYong Motor: sources 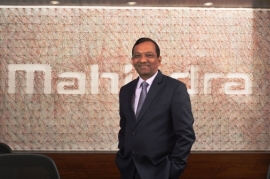 Dr. Pawan Goenka, managing director of Mahindra Group and the chairman of SsangYong’s board (Mahindra & Mahindra)

His visit comes ahead of the sport utility vehicle-focused carmaker’s planned board meeting on Jan. 30. Goenka serves as chairman of SsangYong Motor‘s board.

“This visit is not for him to participate in the board meeting,” a SsangYong Motor spokesman said.

“During his stay, Goenka may arrange a meeting with KDB officials in charge of loans and seek financial help for the cash-strapped unit,” a person familiar with the matter told Yonhap News Agency.

The state-run KDB rolled over 10 billion won of SsangYong’s 30 billion won worth of debt that matured at the end of 2019. Ninety billion won in debt extended by the state lender to the carmaker is set to mature at end-2020, according to the KDB.

“We have not yet received any request from Mahindra for a meeting with KDB officials,” a KDB spokesman said.

The Mahindra executive reportedly will make sure that, as the largest shareholder in SsangYong, the Indian carmaker will make an investment in the local unit and called on the KDB to extend a fresh loan to the carmaker. Mahindra & Mahindra owns a 72.85 percent stake in SsangYong Motor.

Mahindra said it may consider injecting 230 billion won into SsangYong Motor to put it back on track during a meeting with the carmaker‘s labor union in India late last year.

But the Indian parent firm made it clear that the injection will be possible if the KDB extends an additional loan to its Korean unit.

In March 2011, acquired the carmaker in bankruptcy proceedings as part of its “globalization strategy.” (Yonhap)