South Korea is looking at ways to contribute to the security of the Strait of Hormuz off the Iranian coast from “multiple angles,” according to the Foreign Ministry on Wednesday, after US Secretary of State Mike Pompeo raised the issue during his talks with Foreign Minister Kang Kyung-wha in the US.

In their meeting in Palo Alto, California, Tuesday (US time), which covered outstanding issues between the allies including North Korea, Pompeo urged Seoul to bear responsibility to safeguard the strait, stressing Seoul’s dependency on the region for oil imports.

“The US’ stance is that all the countries with an economic stake in the Strait of Hormuz should contribute. Since we are dependent on the region for around 70 percent of our oil imports, (the US’) position is that South Korea should take serious interest and contribute,” Kang told reporters after the meeting, when asked whether Pompeo had directly requested the deployment of South Korean troops.

“We have to make a decision considering all these aspects, as well as the safety of our citizens and businesses in the region, and our relationship with Iran,” she said. “I had a chance to hear the US’ plan and its detailed explanation as to which countries are participating in (the coalition). In regards to what decisions we will make, there will be discussions at the National Security Council.” 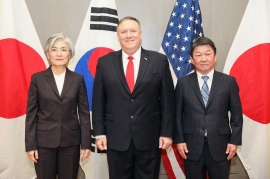 A Foreign Ministry official said on condition of anonymity that the government is considering how to contribute from “multiple angles,” amid the rising tension between the US and Iran since the US killing of Iran’s top military commander, Gen. Qassem Soleimani.

Seoul is faced with the conundrum of responding to a request from its key ally and maintaining its long-standing economic ties with Iran, which has warned of a negative impact on Seoul-Tehran ties if Seoul dispatches troops.

During the talks, the two top diplomats also discussed how to deal with North Korea.

Amid the prolonged nuclear deadlock between US and North Korea, and the North’s fresh threat concerning a “new strategic weapon,” Kang emphasized that improving inter-Korean relations could come first.

“In a larger framework, our basic position is that we would like for the US-North Korean talks and inter-Korean dialogue to supplement each other,” Kang told reporters. “But at a specific point in time, I think it’s possible for the US and North Korea to go ahead first, or South and North Korea could move ahead first.”

She added that with no signs of progress in the US-North Korea talks, it is important for South Korea to keep the dialogue going and maintain the momentum for the North’s engagement.

“For us, there have been important agreements between South and North Korea, and some projects are not subject to restrictions, while others could be exempted from the sanctions,” she said.

“The US fully understands our intentions and our position,” she said, adding that she and Pompeo had exchanged views on many issues during their talks.

Her comment echoes President Moon Jae-in’s remarks -- that strengthening inter-Korean cooperation could lead to progress in the nuclear impasse between North Korea and the US and pave the way for international sanctions to be lifted.

Speaking at a New Year’s press conference Tuesday, Moon said he hoped to pursue inter-Korean projects that are not prohibited under the UN-led sanctions, such as cooperation in the border area and individual tourism, namely the resumption of the Kumgangsan tours.

“The US acknowledges that (South Korea) will closely consult with the US regarding this plan,” a ministry official said on condition of anonymity, when asked whether the US will support Moon’s plan.

“Individual tourism does not violate the restrictions, but we do have to consider many circumstances when conducting (tours). There are a lot of people who want to visit (North Korea) in a time when divided family reunions have stopped. When many countries are already allowing individual tourism to North Korea, the fact that South Koreans are not going stems from restricting ourselves too much.”

Following Kang’s meeting with Pompeo, Japanese Foreign Minister Toshimitsu Motegi joined the two for a trilateral summit. The three parties agreed on close coordination on the North Korean nuclear issue. They also pledged to strengthen communication and cooperation on the latest crisis in the Middle East.

Kang also held separate talks with Motegi in an effort to ease a diplomatic feud between the two neighboring countries over trade dispute and wartime compensation.

She restated Seoul’s call for Japan to drop its export restrictions and called for the two sides to speed up the dialogue process on the issue.

They also exchanged views on the wartime forced labor issue, which has been at the center of strained ties between Seoul and Tokyo, without reaching a breakthrough.

In October 2018, Korea’s Supreme Court ruled that Japanese firms should make compensation for its use of Korean workers during World War II, drawing a strong rebuke from Tokyo, which claims related issues were settled under the 1965 agreement.