The World DJ Festival, is returning to Seoul this summer, bigger than ever.

The organizers of World DJ Festival 2020 -- its 14th edition -- said Seoul will see three separate shows, starting with a prefestival concert at the Jamsil Olympic Stadium in the southern Seoul on April 30. The event will take place as part of the Formula-E Championship, an electric vehicle racing championship being held in Seoul for the first time. 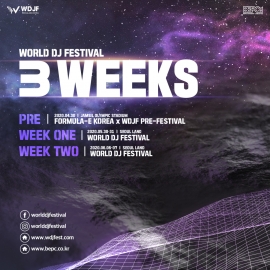 The World DJ Festival will resume May 30-31 and again on April 6-7, at the Seoul Land in Gwacheon, Gyeonggi Province, just south of Seoul.

The festival, which was the first global EDM event to land in Korea, has garnered more than 800,000 festivalgoers, according to the organizers.

While the lineup has yet to be announced, some 170 teams of musicians are reportedly participating. Past headliners have included Odesza, Above and Beyond, Justice and Avicci.

The tickets for this year’s World DJ Festival are available through WeMap at wemakeprice.com.