South Korea’s top nuclear envoy said Wednesday that Seoul and Washington are looking for ways to promote dialogue with Pyongyang under the current sanctions framework.

“Promoting dialogue within the sanctions framework is the issue of mutual interest (of South Korea and the US),” Lee Do-hoon, special representative for Korean Peninsula peace and security affairs, told reporters before heading to Washington on Wednesday for talks with US Deputy Secretary of State Stephen Biegun.

“If you look at the past year or more, you can see that the US has emphasized promoting dialogue within the firm sanctions framework.” 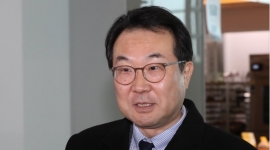 The US Treasury Department on Tuesday announced sanctions on two North Korean entities, including one based in China, for involvement in sending North Koreans to work abroad in violation of international sanctions.

Lee also said improving inter-Korean relations could help facilitate dialogue between the US and North Korea.

“The need to promote US-North Korea relations by improving inter-Korean relations is being strongly raised,” he said.

“I plan to meet with people in the US administration including Biegun and discuss with them what South Korea, the US, and the two of them together can do to break through the current situation.”

In regard to the inter-Korean projects that President Moon Jae-in emphasized during his New Year’s address, Lee said Seoul will start with whatever it can do within the boundaries of the current sanctions.

“We plan to proceed with (the inter-Korean projects) swiftly through consultations (with the US). As for how much we can do, we will have to hear what (the US) says,” he said.

The US recently said that it delivered its intent to resume working-level denuclearization negotiations with North Korea, which were last held in Stockholm in early October.

“From what I know, the US is making various efforts through diverse channels,” Lee said.

“There is no need for us to set a deadline (for the working-level talks), but it is important that the US and North Korea hold talks promptly as a prolonged deadlock benefits no one.”

About the North criticizing the South’s efforts to mediate, Lee said, “It is important how Seoul, as the party directly involved in the Korean Peninsula issues, moves the situation forward. We have made such efforts, and we plan to continue doing so, no matter what others say.”