Lee Soo-man, founder and chief producer of S.M. Entertainment, one of the big three agencies in the K-pop world, said Tuesday that he sees no fault in artist management and that online hate speech is to blame for suicides and increasing cases of K-pop stars suffering from anxiety disorders. 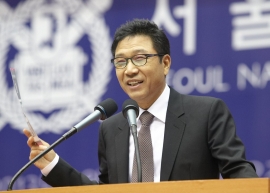 “There is no fault in the system. I take pride in (our artist management) system … we are possibly No. 1 worldwide. We think a lot about the education and character (of artists),” Lee said at a seminar in central Seoul on K-pop and innovation.

“Once again, before criticizing our system, the public, parents and teachers should tell (children) not to download illegal content. It would be appreciated if parents asked their children nicely not to write hateful comments online.”

His comments follow a series of suicides by K-pop artists, which have raised alarm bells in a country that takes pride in its growing cultural clout throughout the world.

Singer-actor Sulli, who was a member of S.M.’s five-piece girl group f(x), died in October in one of the highest-profile cases last year. A month later, her friend and singer Goo Hara also died by suicide.

Some critics have called the K-pop industry inhumane, citing the grueling “boot camp” regimen that aspiring singers undergo at young ages, as well as the strict management of artists’ private lives, which includes prohibitions on romantic relationships.

S.M. Entertainment is one of South Korea’s top three K-pop labels. It has produced and managed K-pop boy bands SHINee and EXO and girl band Red Velvet, among other artists.