Meanwhile, unionists continued their stage-in protest, vowing to deter what they saw as excessive government meddling in the organization’s personnel affairs.

Yoon, a former senior presidential secretary for economic affairs, ordered the launch of a new task force focused on corporate innovation, IBK said in a statement.

He also discussed the effects of the latest US-Iran conflict on the local economy, along with measures to deal with misselling of high-risk financial products. 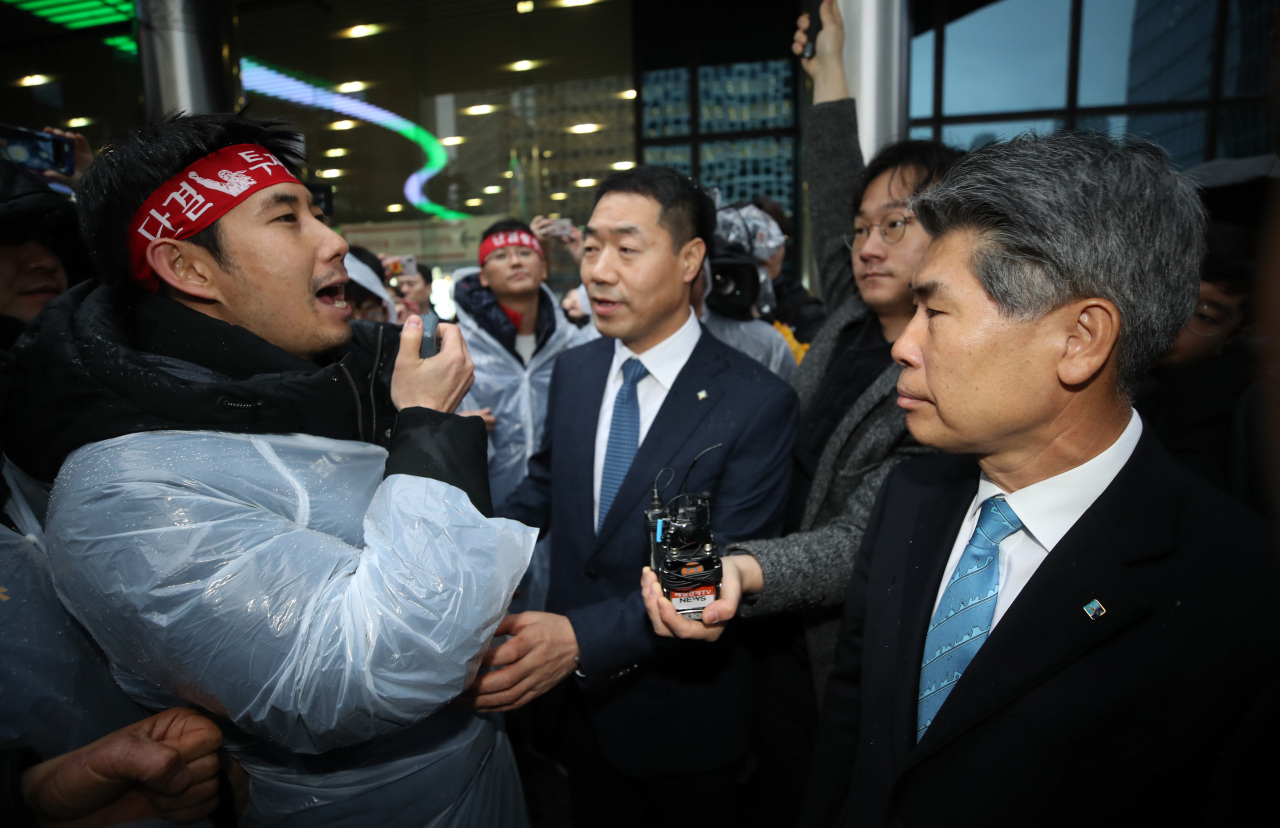 IBK CEO Yoon Jong-won is blocked by a union member outside the bank’s headquarters in central Seoul on Jan. 7. (Yonhap)
As the labor union has been protesting for nearly two weeks, blocking him from entering the bank’s headquarters, the meeting was held at the Korea Federation of Banks head office close by in the bustling district of Myeong-dong. The IBK’s board meeting is conventionally held at its headquarters twice a month.

Tuesday marked the 12th consecutive day that Yoon was blocked from entering the bank’s head office since he took office on Jan. 2, with protestors barricading the entrance.

The IBK union members have taken issue with his lack of banking expertise and experience, but President Moon Jae-in has refuted such claims, citing his “qualified” background. He also stressed the government’s authority in selecting the state-run bank’s leadership.

“In the past, the government was involved in leadership appointments at private financial institutions and banks, so there were (issues raised with such decisions),” Moon said during his New Year’s press conference at Cheong Wa Dae.

“But the IBK is a state-run bank backed by the government’s investment and a policy financial institution which bestows it with personnel authority,” he added.

The head of the state-run bank is appointed by the president upon the recommendation of the Financial Services Commission chairman.

Indirectly addressing the IBK union’s issues with Yoon as the first CEO to be appointed from outside the bank in a decade, Moon said that his administration made the choice to bring about change.

“When we believe there is a need for change we bring someone from the outside and when there is need for stability, we appoint from within the organization,” he said.

The president stressed that it is wrong to just “veto” Yoon because he wasn’t appointed from within the bank and called for the union to view his appointment with an “open mind” in terms of the IBK’s development and its duties to support the nation’s small and medium-sized enterprises.

Despite Moon’s remarks, industry watchers are divided on whether the protests will end soon with the IBK union members having reportedly requested other unions to join.

“The focus of this protest is not Yoon, but Cheong Wa Dae, the government and ruling party which have brought about this situation,” the IBK union said Monday

“If they are willing to apologize and talk with us, we are always open to the option.”