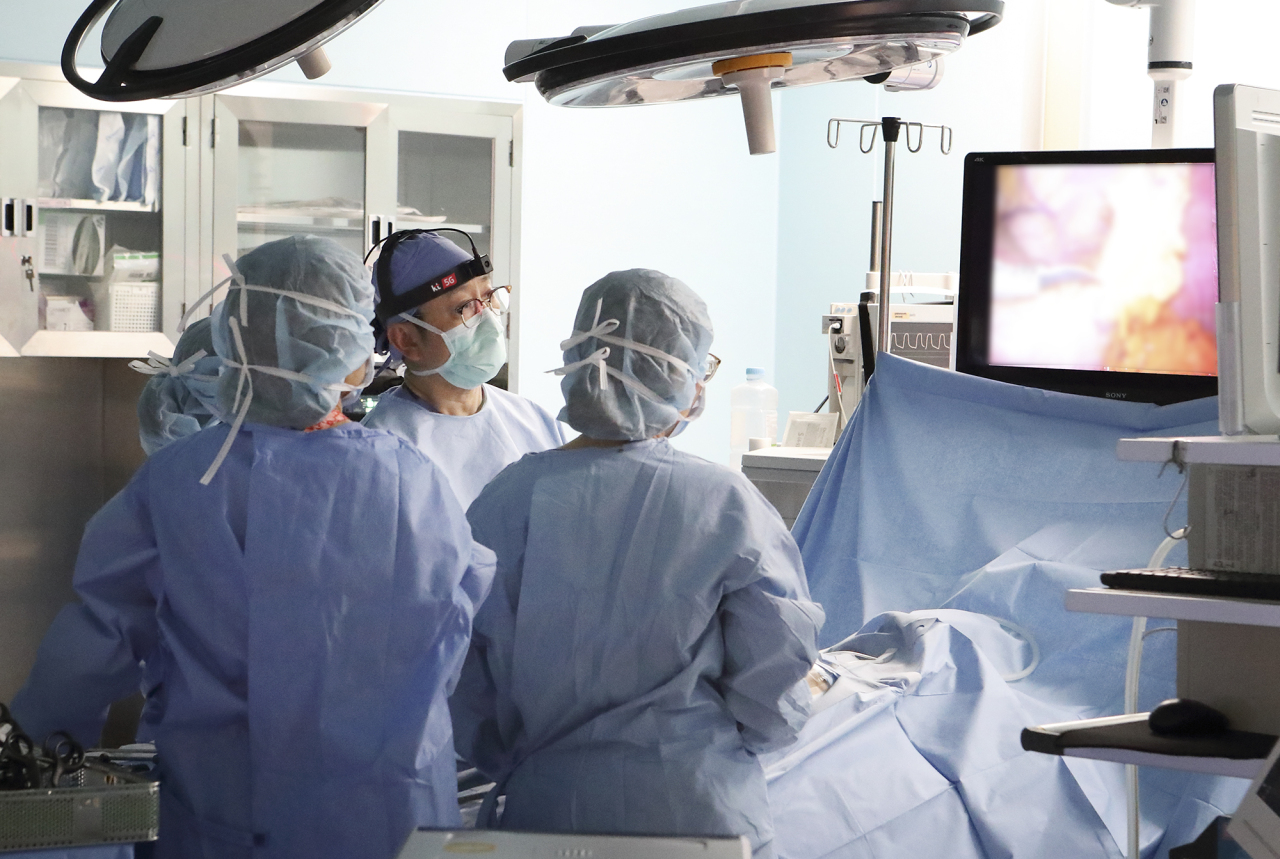 Medical personnel at the Samsung Medical Center observe surgery in an operating room, via a screen that shows real-time images from the surgeon’s wearable device, thanks to a 5G network-enabled system. (KT)
During a press conference held Monday at the Samsung Medical Center in southern Seoul, the two companies introduced several applications that make use of the 5G network throughout the hospital complex.

The RAN-based 5G network at the tertiary hospital makes certain procedures possible at lower cost, when compared with the cost of building wired internet infrastructure, said Jang Kee-taek, chair of the Department of Pathology and Translational Genomics.

A doctor, for instance, can send about 4-gigabyte frozen section images -- images obtained from biopsies -- at an average speed of 1 gigabyte per second, allowing colleagues in different buildings to view the images quickly and deliver a precise diagnosis as promptly as possible.

Previously, the process took longer or the doctors had to move back and forth between buildings to check test results.

Explaining that setting up the wireless system had been a key priority in collaboration with KT, Pyo Hong-ryul, chair of the Department of Radiation Oncology, said the hospital would eventually expand it to allow sharing via devices such as smartphones and tablets.

The 5G network also makes it easier to observe surgery remotely, according to the officials.

During the press conference, the hospital streamed a video in real time that showed an on-screen conversation between professors Choi Jun-ho and Sohn Tae-sung while Sohn performed surgery on a patient.

The hospital, for the time being, has not adopted a cloud system and will continue to operate its own database to handle patient information. The hospital said it will eventually use a cloud system, though it is not certain whether it will use that of KT.

On patient privacy, KT said the network was only accessible via authorized devices.

The 5G-powered hospital system could also be implemented at other Samsung Medical Center branches, according to hospital officials.

KT and the Samsung Medical Center added that they would work together to develop other medical solutions. The two entities signed a memorandum of understanding in September last year but have not yet decided when to commercialize their smart hospital solutions.