A North Korean propaganda outlet called Tuesday for a "life-or-death" battle against what it called "unprecedentedly murderous" sanctions, saying the US campaign to stifle the communist nation has gone beyond its limit.

North Korea's media outlets have emphasized the importance of "self-reliance" in various areas apparently to brace for a protracted struggle against pressure led by the United States amid a lack of progress in denuclearization talks. 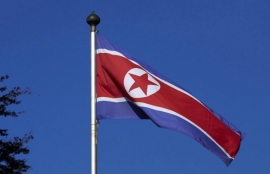 "The frontal breakthrough campaign is a life-or-death battle to neutralize sanctions and pressure by hostile forces intended to destroy our rights to survival and development and open a new viable path toward socialism," the Minju Joson, the daily of the North's cabinet, said, referring to a drive set forth by Kim in his New Year's message.

The paper called for "turning the current challenges into our advantage" for the country to "soar higher and faster with our own power and technology." It also called for people to take an action-oriented, get-things-done attitude, such as "pushing the walls as if they were doors and even jumping into a fire."

"The DPRK is being inflicted with an unprecedentedly murderous pressure campaign that others wouldn't be able to withstand even for a single day," the paper said. "The US campaign to stifle the DPRK with sanctions and pressure has reached its limit."

North Korea is hoping that progress in denuclearization negotiations with the U.S. could result in easing or lifting crippling sanctions and help revitalize its moribund economy, but nuclear talks have been stalled since the no-deal summit between the North's leader Kim Jong-un and US President Donald Trump last February.

In his New Year's Day message, Kim said that he has no expectation of the US lifting sanctions anytime soon and asked for making a "frontal breakthrough" to tackle challenges confronting the country and intensified efforts to build a self-reliant economy. (Yonhap)