K-pop generates over 6 billion tweets in 2019

K-pop remained a dominant topic on Twitter in 2019, as the platform’s internal data shows 6.1 billion tweets about the Korean music industry.

The number is up nearly 15 percent from the year prior, an indication that K-pop is more popular than ever on the platform.

And according to Kim Yeon-jeong, Twitter’s head of global K-pop partnerships, the tweet service plans to keep the upward trend going. 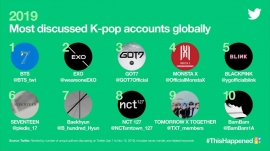 “To make the K-pop community more lively on Twitter, we plan to provide quality content in partnership with major K-pop events such as Soompi Awards, KCON and MAMA, as well as with various artists to help expand their global influence,” Kim said in a statement.

Last year, Twitter’s efforts to interact with fans even set a world record after the hashtag #TwitterBestFandom, which was used as a tool to vote in the 14th Annual Soompi Awards, generated over 60 million uses in 24 hours.

BTS was the most discussed K-pop account for a third consecutive year in 2019, followed by EXO and Got7.

Twitter also revealed the 10 fastest rising K-pop accounts in the world, among which Blackpink came out on top.

The four-piece girl group made history last year after becoming the first K-pop act to perform at Coachella.

The group’s appearance on #TwitterBlueroom Live in Los Angeles in October drew over 2 million views, marking the highest figure to date.

In a further sign of the group’s popularity, over 30 million tweets using the hashtag #SuperM were generated around the group’s debut.

When it comes to countries that tweeted the most about K-pop, Thailand came first while South Korea itself was second. Indonesia, the US and the Philippines followed.