The automaker also touted its product lineup that “fits Korean tastes” as the reason for topping industry sales for four years in a row, during the automaker’s New Year’s press conference.

According to the company, it has sold a record-high of 78,133 vehicles last year, up by 10.4 percent from the previous year -- the largest sales figure since 2016.

The company said its bestselling E-Class family has led sales with 39,788 units, among its bolstered lineup which includes GLC, CLS, and its first-ever electric vehicle the new EQC under its EQ brand.

“We are committed to quality, from product to customer support and infrastructure. (Behind the success of achievements in the past years,) also, we had a product range that fits Korean tastes, such as different vehicle segments, including SUVs and sport cars,” Mercedes-Benz Korea CEO Dimitris Psillakis told reporters. 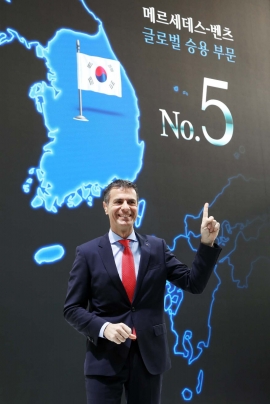 When asked about the specific sales goal this year, he said Mercedes-Benz will continue to invest to hold the top position by providing customers top quality products and service.

In 2020, the German automaker plans to roll out nine models of new vehicles and six types of face-lifted cars to offer customers a wide range of options.

The company vowed to strengthen its customer service and widen corporate social responsibility programs, by holding CSR-related events in other regions. In April, the company will host its annual GIVE’N RACE marathon in the southern port city of Busan.