The swing voters who usually are ideologically neutral are estimated to take up 30-40 percent of the total voters across the nation. They are also roughly called centrists.

Once more, the ruling and opposition parties are paying close attention to the opinion of centrists, three months ahead of the April 15 general election.

According to recent surveys by major pollsters, the majority -- who identified themselves as liberals -- support the ruling Democratic Party, as usual. And the main opposition Liberty Korea Party has the highest approval rating among conservatives. 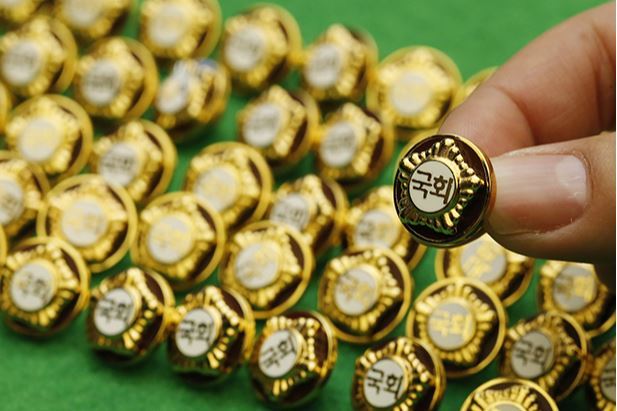 Badges for lawmakers at the 20th National Assembly, whose term expires on May 29, 2020 (Yonhap)
But the approval ratings for the rival parties among the centrists were approximately split: the ruling party garnered 39 percent compared to 31.9 percent for the main opposition party.

Of the 1,500 respondents, 42 percent supported the Democratic Party and 31.2 percent backed the Liberty Korea Party.

A noteworthy point is that some of the centrists have shifted their support from the liberal camp to conservative parties. This is in contrast to the trend in first two years of the Moon Jae-in administration, which took office in May 2017.

A similar trend is seen in a survey by Gallup Korea, which was released on Jan. 11. Its result showed that President Moon posted an approval rating of 47 percent among moderates, with the rest disapproving.

In contrast, 73 percent of the liberal-oriented people supported Moon, and 73 percent of conservatives said the president “is not doing well.”

Gallup Korea’s past polls also suggested that Moon and the ruling party have gradually lost popularity among some of the centrists nationwide over the past couple of years.

“The ruling party has an unstable lead over the opposition. The situation has fully changed from the days when the president’s approval ratings hovered at 70-80 percent in 2017,” a political commentator said.

Meanwhile, the Realmeter survey suggests that rival parties could engaged in neck-and-neck battles in the Sejong-Daejeon-Chungcheong area and the Busan-Ulsan-South Gyeongsang area in the coming election for the 21st National Assembly.

The support ratings for the Democratic Party and Liberty Korea Party in Sejong-Daejeon-South and North Chungcheong Provinces recorded 40 percent and 35.3 percent, respectively. The area has traditionally held a relatively large portion of floating voters.

In Busan-Ulsan-South Gyeongsang Province, the two parties have a narrow gap -- 35 percent (for the ruling party) vs. 36.1 percent. 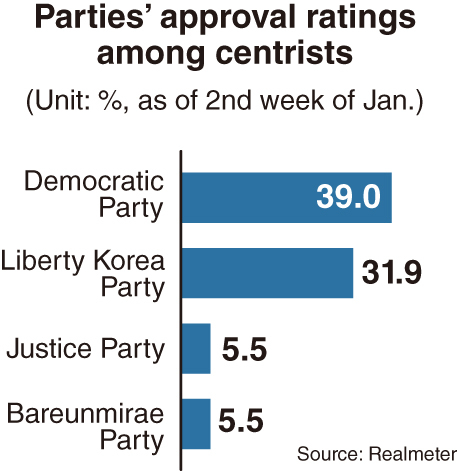 (Graphic by Kim Sun-young/The Korea Herald)
Though the area has been the home turf of the right-wing parties -- alongside Daegu-North Gyeongsang -- voters in the southeastern region gave more ballots to the left-wing candidates during the 2017 presidential (Moon in Busan and Ulsan cities, but Hong Joon-pyo in South Gyeongsang) and 2018 local elections.

In the Gallup Korea poll, only 37 percent of the people residing in Busan-Ulsan-South Gyeongsang responded that President Moon “is doing well,” while 52 percent expressed disapproval of him.

Gallup Korea also showed that Seoul citizens are divided over their assessment on the incumbent administration’s performance by 47 percent (supporters) vs. 43 percent (pessimists).

Still, the pessimists’ No. 1 pick for their disapproval for Moon was “lack of capability in economy-related affairs.” More than one out of every three pessimists said the economy is the primary reason why they “do not support” him.

Optimists pick factors -- such as diplomacy, welfare, inter-Korean relations, and prosecution reform -- for their approval.