US keeps S. Korea on list of countries to monitor for currency practices

WASHINGTON -- The United States said Monday it is keeping South Korea on a list of countries to monitor for currency practices.

The US Treasury Department published the decision in a semiannual report to Congress, which also included nine other countries, including China, Japan and Germany, in the monitoring list. China had previously been listed as a currency manipulator. 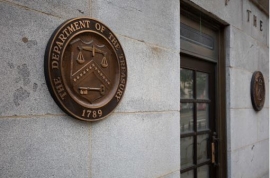 South Korea had hoped to be exempted after the Treasury indicated in its previous report in May that the fourth-largest Asian economy could be removed from the list if it continued to meet only one of the three criteria for a currency manipulator in the ensuing six-month period.

However, the new report said South Korea's bilateral trade surplus with the US rose back above the threshold, qualifying for two of the three criteria.

The US determines a trading partner to be a currency manipulator if it has a bilateral trade surplus with the US of at least $20 billion, a current account surplus of at least 2 percent of gross domestic product and "persistent, one-sided intervention" in foreign exchange markets.

The Treasury said South Korea's trade surplus "has edged slightly up since 2018 to just above $20 billion over four quarters through June 2019, driven by increased Korean exports to the United States."

It also said the Asian economy's current account surpluses continued to moderate but still remained at 4 percent of the GDP over the four quarters ending in June 2019.

"Korea has met two of the three criteria in every Report since April 2016 with the exception of the May 2019 Report, having a material current account surplus and a significant bilateral trade surplus with the United States," the report said.

Meanwhile, China's listing made headlines because it signified that the US is dropping its designation of the country as a currency manipulator ahead of the signing of a preliminary bilateral trade deal Wednesday. (Yonhap)