Koreans mourned the people and animals killed in Australia’s bushfires in central Seoul on Monday, calling on the Korean and Australian governments to take tougher action to combat climate change.

Despite the subzero temperatures, some 100 people gathered and held up candles in front of the Australian Embassy to stand in solidarity with living creatures victimized by the unprecedented wildfire crisis.

A series of massive bushfires across Australia have burned more than 25.5 million hectares of land, killing at least 27 people, an estimated 1 billion animals and countless trees. More than 2,000 homes were destroyed and thousands of people were forced to evacuate.

At the rally, which began with a minute of silence to remember the human and nonhuman victims, people carried handwritten placards reading “2050 Greenhouse Gas Zero,” “Coal Out Climate Crisis Stop” and “Earth is burning.” Two children were also spotted holding a placard that read “Save Koalas.” 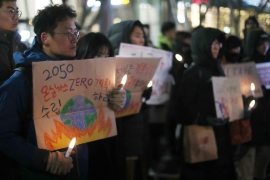 A man holds a handwritten sign at a rally in Gwanghwamun, central Seoul, on Monday to mourn the victims of Australia’s bushfires. The sign’s message is a call for the Korean government to achieve zero greenhouse gas emissions by 2050. (Yonhap)

“The reason wildfires in Australia grew and spread is climate change. The wildfires are not only Australia’s problem,” said Min Jung-hee, an environmental activist. “Beyond cutting back on using energy at an individual level, there must be drastic changes in current climate change policies.”

Though competing arguments have been made about the principal causes of the recent wildfire crisis, scientists say extreme heat and dryness make it easier for fires to break out more frequently, burn more intensely and spread uncontrollably.

Australia broke its all-time temperature record in December, with a nationwide high of 41.9 degrees Celsius recorded Dec. 18. The previous record, set in 2013, was 40.3 degrees Celsius. Many parts of the country are also experiencing drought.

Australia’s government, however, has maintained there is no direct link between climate change and wildfires and has not made a commitment to do more to reduce its greenhouse gas emissions.

Environmental activists condemned both the Australian and Korean governments for their lukewarm response to climate change and called on them to set higher emissions reduction targets and to take concrete action such as stopping coal production and shifting to renewable energy.

Korea is the world’s fifth-largest greenhouse gas emitter per capita as of 2016 as it still relies heavily on coal-fired power plants, as well as nuclear reactors, for electricity generation. It aims to increase the share of renewable energy in its energy mix to 20 percent by 2030, but activists criticize this goal as unambitious.