Former boyband Big Bang member Seungri appeared at court on Monday morning for a hearing on an arrest warrant filed by prosecutors.

The 29-year-old arrived at Seoul Central District Court in Seocho, southern Seoul, at around 10:05 a.m. He did not respond to questions from reporters.

On Dec. 8, prosecutors sought the arrest warrant for Seungri regarding several counts of pimping and gambling charges, among others. 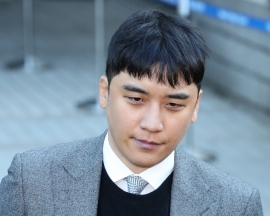 The court’s decision over the arrest warrant’s issuance is expected to be out later in the evening.

This is the second time he is facing possibility of arrest.

In May last year, the police request for his arrest warrant on suspected violations of laws on prostitution and economic crimes was dismissed by the court. Police referred the case to prosecutors about a month later in June.

Police forwarded to prosecutors an additional charge of foreign exchange transactions law violations in October of the same year.

According to prosecutors, suspicions against Seungri include habitual gambling for around 3 1/2 years from December 2013 in Las Vegas, procuring prostitutes for foreign investors of his private nightclub business from September 2015 to January 2016, wrongly registering his nightclub as restaurant with the district office, embezzling company funds and sharing nonconsensual exposing photos of women on a messaging application.