At the 24th Asian Television Awards held in Manila on Saturday, JTBC's 20-episode weekend drama airing from November 2018 to February 2019 won the title, outclassing seven competitors including "Dr. Prisoner" of South Korea, "Stepmom and Daughter Blues" of Japan and "The Rise of Phoenixes" from China. 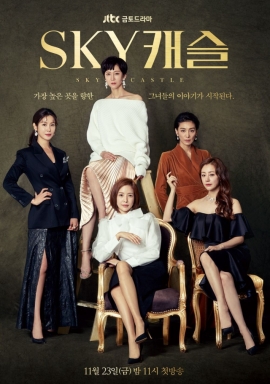 JTBC also won the same title last year for its 2018 melodrama "Something in the Rain."

"Sky Castle" satirizes South Korea's fierce competition for the college entrance examination through upper-class families. It marked the highest-rated drama in Korean cable television history, with a viewership of 23 percent for its final episode.

Launched in 1996, the ATA awards TV programs in 56 categories, ranging from drama series and documentaries to news, across Asia. (Yonhap)