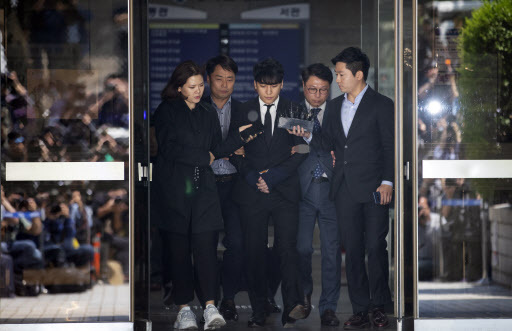 A hearing on whether to issue an arrest warrant for Seungri, whose real name is Lee Seung-hyun, will be held at the Seoul Central District Court at 10 a.m. Monday, with the decision expected later in the day.

Seungri is suspected of procuring prostitutes on 29 occasions for investors from Taiwan, Hong Kong and Japan in September 2015 and January 2016.

Separately, he is accused of sharing via a mobile messenger nude photos of three women that were secretly taken without their consent.

He is also suspected of having participated in illegal gambling in Las Vegas, the US, for three years and six months on several occasions and illegally exchanged currency. He also faces embezzlement charges.

The warrant request comes about seven months after police sent the case to the prosecution with the recommendation of indicting him without detention in June. The police’s earlier attempt to arrest Seungri was rejected in May as the court saw the charges “disputable.”

The police launched a probe in January and dispatched some 150 officers in connection with the scandal encompassing illicit sex videos, drugs, prostitution and embezzlement. The scandal, involving several other K-pop stars, sent shockwaves across the country and the K-pop industry.