The group uploaded "Interlude: Shadow," the first trailer of its fourth full-length album "Map of the Soul: 7" on its YouTube channel at 12 a.m. Friday.

In the three-minute video, member Suga walks listeners through his ambitions and fears involving his band's globally acclaimed music career, carrying on the album series' Carl Jung-inspired theme of exploring the ego. 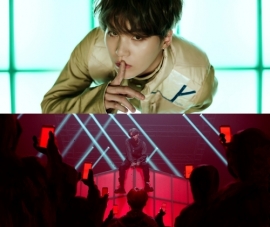 The video employed motion control cameras and other special effect filming gears to visualize the song's images, according to the management agency, Big Hit Entertainment.

Big Hit said "Shadow" is based on the emo hip-hop genre with its unique majestic and shadowy moods. The song is also a result of a sampling of the instruments from "O!RUL8,2?," the intro track of BTS' 2013 album with the same name, Big Hit said.

On Jan. 17, BTS will pre-release a single from the upcoming album before its official release.

The album is the second issue of the K-pop band's ongoing "Map of the Soul" album series, whose first issue, "Persona," topped the Billboard 200 album chart in April last year. (Yonhap)