TEHRAN, Jan  9, 2020 (AFP) - Iran, alluding to "doubtful scenarios", on Thursday challenged international suggestions that the Ukrainian airliner that crashed outside Tehran this week was mistakenly downed by an Iranian missile.

The Iranian government, in a statement, urged Canada to share its information after Prime Minister Justin Trudeau said "multiple" intelligence sources indicate that Iran shot down the Boeing airliner after it took off from Tehran on Wednesday, killing all 176 on board, including 63 Canadians. 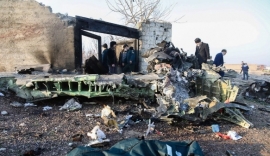 Iran's foreign ministry also invited the US planemaker Boeing to "participate" in its enquiry into the crash.

Canada's theory was swiftly backed up by other Western leaders, including British Prime Minister Boris Johnson who said mounting evidence supported an Iranian missile strike, which "may well have been unintentional".

US President Donald Trump indicated that Washington officials believe the Kiev-bound Boeing 737 was struck by one or more Iranian missiles before it ditched and exploded outside Tehran.

Flight PS752 went down just minutes after takeoff from Tehran airport in the dark early Wednesday, after Tehran launched ballistic missiles at American military targets in Iraq in retaliation for the January 3 US drone strike in Baghdad that killed a top Iranian general.

Tehran said it was prepared to allow experts from the countries who lost people in the crash to help with the enquiry.

The ill-fated plane was carrying 82 Iranians,11 Ukrainians, 10 Swedes, four Afghans, three Germans and three Britons, as well as the 63 Canadians.