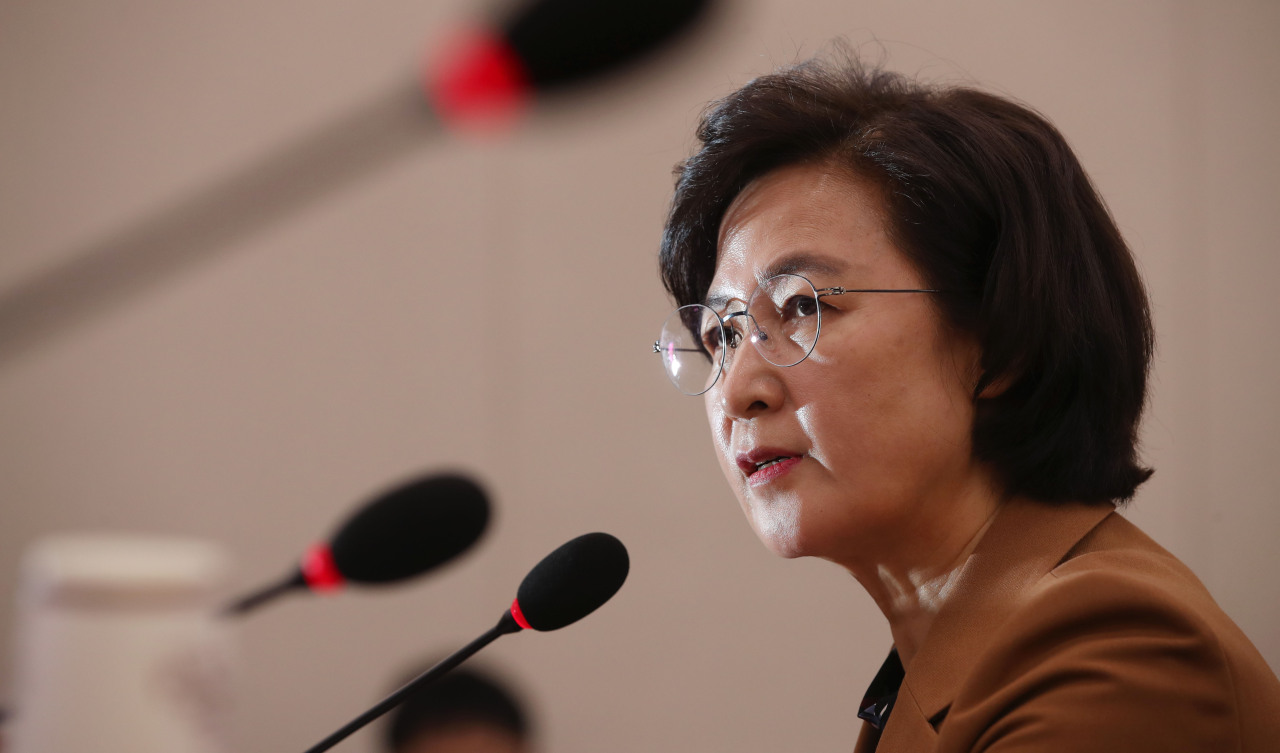 Justice Minister Choo Mi-ae speaks during a Legislation and Judiciary Committee meeting at the National Assembly on Thursday.(Yonhap)

Calling the shake-up “finely balanced and fair,” Choo defended herself against claims that she had abused her power by skipping a consultation process with Prosecutor General Yoon Seok-youl ahead of the reshuffle.

“I asked him several times to put forth his opinion but he didn’t do so,” Choo said during a Legislation and Judiciary Committee meeting at the National Assembly on Thursday.

The ruling Democratic Party responded positively, saying the move was a refreshing change from previous shake-ups, claiming those had been lopsided and based on department and personal connections.

“We evaluate it as a balanced reshuffle which appointed prosecutors at the criminal justice department, which accounts for a majority (of the prosecutors’ office),” Democratic Party Floor Leader Lee In-young said.

“It was a retaliation against prosecutors who are investigating corruption charges against the Moon administration. It was an oppression against them,” he said.

The reshuffle came as Prosecutor General Yoon is at odds with Cheong Wa Dae. President Moon appointed him in July, touting his enthusiasm for fighting corruption and unfair practices throughout his career.

Tensions flared up when the prosecution intensified probes into alleged irregularities by former presidential aides and Justice Minister Cho’s family and raided the presidential office in December for its probe into an alleged cover-up of a special inspection into Yoo Jae-soo, the former vice mayor of Busan, who faces bribery charges.

Han Dong-hoon, head of the anti-corruption department who led the probes into Cho, was assigned to the No. 2 post in the prosecutors’ office in the southeastern port city of Busan.

Park Chan-ho, who was in charge of probes into allegations that the presidential office helped President Moon’s close friend win the 2018 mayoral election in Ulsan, was named as the head of the prosecution office on the southern resort island of Jeju.

With the president’s active pursuit of the prosecution overhaul, a bill was passed in December that will pave the way for the creation of an investigative organization to check the power of the prosecution in corruption probes targeting high-ranking government officials. The Democratic Party plans to introduce a bill Tuesday that would grant wider investigative powers and more authority to the police.

While Moon has called on prosecutors to join his drive by carrying out internal reforms, Yoon’s efforts to achieve tangible results appear to have fallen short of the president’s expectations, critics said.