The producer of tvN variety show “The Meow is Fake” issued an official apology for violating animal rights after its first episode aired Sunday.

The producer apologized for not providing sufficient information required during the adoption process to nonprofit organization Nabiya. The organization is currently asking for the return of the adopted cat. 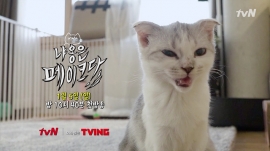 The habitat for the cat was the main problem, as the show takes place in a house rented for three months. After three months, the adopted cat has to be moved, and the nonprofit organization’s position is that this can be stressful for animals like cats that are sensitive to their environment.

The producers also admitted they had not informed Nabiya that the star of the show would be taking care of the cat for only three months.

“It is true that boy band Pentagon’s member Wookseok is the one that signed a contract to adopt the cat with Nabiya. We said during our media event that the producers would take care of the cat after the program ends. But this became a problem because we did not provide this information in advance to Nabiya," an official from the show said in a statement.

“Currently, our team is still in discussion with Nabiya about this issue,” a representative of tvN told The Korea Herald. The official added that it had not been decided whether to air the second episode Sunday.

Animal rights issues are also being raised off the small screen. The organizer of the ice fishing Hwacheon Sancheoneo Festival, which has been struggling to hold the festival this year due to unusually warm weather, now has one more problem to worry about.

An animal rights association of 11 local animal-related organizations on Tuesday accused the organizers of the annual festival of violating animal rights.

The association pointed out that the event organizer did not feed the fish for days when they were being transported to the festival site in order to make them more eager to take festivalgoers’ bait, making it easier for the participants to land a catch.

The event organizer, however, denied the accusation that it is starving the fish for entertainment. “It is true that we do not feed the fish when we were transporting them by trucks. But it is not for entertainment. Fish will die from throwing up food during transportation if we feed them,” a Hwacheon local government official told The Korea Herald.