Pentagon chief: US has restored 'level of deterrence' on Iran

WASHINGTON (AFP) -- US Defense Secretary Mark Esper said Wednesday that the United States has reestablished some deterrence toward Iran in the wake of the January 3 drone strike that killed Iranian general Qasem Soleimani in Baghdad.

"I think at this point with the strikes we took against KH in late December and then our actions with regard to Soleimani, I believe that we've restored a level of deterrence with them," he told reporters, referring to Kataeb Hezbollah, an armed Iraqi group backed by Iran.

"But we will see. Time will tell," Esper said.

Esper's comments came after Iran fired a volley of ballistic missiles Wednesday into two bases in Iraq that house US troops, in response to Soleimani's killing. 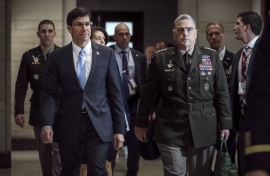 No US or Iraqi personnel were killed in those strikes, and reports said the US knew that an attack was coming.

The Pentagon also said its own "early warning systems" detected the incoming missiles in advance, allowing personnel to avoid injury.

Joint Chiefs Chairman General Mark Milley dismissed suggestions that Iran did not intend to kill Americans with its missile barrage, which struck the sprawling Ain al-Asad airbase in western Iraq and a base in Arbil, both housing American and other foreign troops with the US-led coalition fighting the Islamic State group.

"I believe, based on what I saw and what I know, is that they were intended to cause structural damage, destroy vehicles and equipment and aircraft and to kill personnel. That's my own personal assessment," Milley told reporters.

"But we took sufficient defensive measures that there were no casualties to US personnel, coalition personnel, contractors or Iraqis."

Esper also downplayed the firing of two rockets into Baghdad's fortified Green Zone late Wednesday, where the US and other foreign embassies are located and many US troops are based.

"We should have some expectation that the Shia militia groups, either directed or not directed by Iran, will continue in some way, shape or form to try and undermine our presence there, either politically or, you know, take some type of kinetic actions against us or do Lord-knows-what," Esper told reporters.