LG Electronics showcased a connected car model for the first time this year at the Consumer Electronics Show 2020 in Las Vegas.

The company exhibited the connected car model, co-designed with automotive seating supplier Adient, next to the AI ThinQ zone at its booth, offering a glimpse of a connected car seamlessly linked to home. 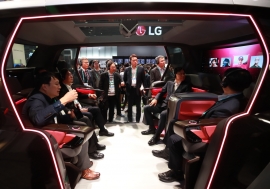 Made with advanced electronic displays and parts and software capabilities, including WebOS Auto, the model -- which looks like a train car -- was themed on an autonomous public transport system.

LG said the concept of the connected car could be described as an expansion of the home, as it is literally filled with small home appliances fitted for cars.

Inside the car, two paired seats are positioned to face each other. On one side, there is a cube-shaped fridge for storing beverages. When a passenger takes out a canned coke from the fridge, an organic light-emitting diode display shows the price of the drink and enables payment for it.

On the opposite side, there is a mini clothes care system that allows passengers to “steam-care” their jackets onboard if needed.

Based on the assumption that strangers would share a ride on such autonomous cars in the future, LG and Adient designed the four seats to be 15 degrees inward, so passengers do not need to confront each other face-to-face.

On the head of each seat, speakers are embedded for personal use. Sensors are built into the ceiling, which can recognize passengers’ gestures. Microphones are also installed for each seat for issuing voice commands.

“To differentiate from rival platforms, LG has tried to create a connected car that feels like home by bringing LG’s flagship appliances to the car,” said James Hwang, senior UX designer at the company’s new business customer research team. 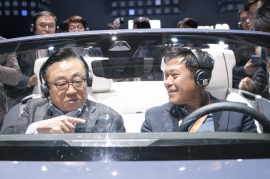 Samsung, for its part, unveiled a new edition of the Digital Cockpit built with its subsidiary Harman.

The Digital Cockpit 2020 uses 5G to link features inside and outside of the vehicle and provide connected experiences for drivers and passengers, Samsung said.

It is called the 5G-based Telematics Control Unit, or TCU, which is ready for commercialization for upcoming commercial vehicles including BMW’s iNEXT.

Once the driver logs in using either facial recognition or a smartphone fingerprint reader, the center information display shows the driver’s schedule and a range of other information.

The entire system is empowered by Samsung’s Exynos Auto V9 SoC, a semiconductor for vehicle electronics, and Android 10 OS, which allows several features to be run at the same time.

When the driver activates Samsung’s Bixby voice recognition service, the display shows the AI’s animation that listens to the driver’s commands.

At the back of the vehicle, a 53.7-inch microLED display works as a tail lamp. With “vehicle-to-everything communication technology” and the tail display, the vehicle can share messages and communicate with parties outside the vehicle when required. For example, the display might show messages such as “roadworks ahead” and “pedestrians approaching.”