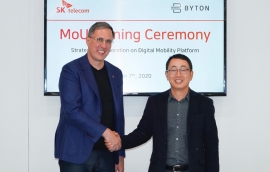 The two companies signed an MOU at the Consumer Electronics Show in Las Vegas, the world’s largest annual tech show that is currently underway.

Future cooperation between the two companies is expected to focus on the development and application of an integrated in-vehicle infotainment system. The M-Byte model, which features a 48-inch screen, is also likely to incorporate this IVI system.

SKT said it hopes to continue developing the system and make it compatible with its own 5G network, which could allow faster real-time data processing.

Meanwhile, SK Telecom introduced its own IVI system, which incorporates the T Map navigation software as well as music and video streaming formats, at CES 2020.